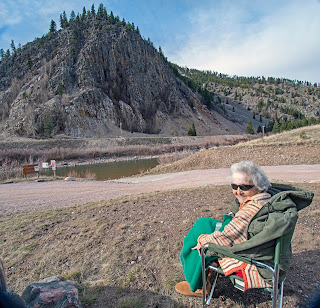 Sally Phillips passed on February 23rd, just shy of her 88th year of a very full life. Born in Santa Rosa, CA on February 28, 1934 she was the youngest of five children to Franklin and Virginia Whitehead. Sally studied criminal law at UC Berkley, and married Carlos Phillips in 1956. As a salesman by trade Carlos and Sally moved the family around the Bay Area to Chicago, St. Louis, Connecticut and finally settled in Cincinnati in 1970. Unfortunately, Carlos died in 1994 at the age of 62 from complications due to early onset Alzheimer’s disease. As a pillar of the family this was a deep blow to everyone.

Sally was proud of her vocation as a “housewife” and she enjoyed spoiling the kids, Kate Davis, Jonathan Phillips and Betsy Needles. Kate attended U of M in 1978 with a degree in Zoology, with Sally following here to Missoula in 1990. She moved to a comfortable home in the Rattlesnake. Jonathan is in the film industry working from his home/studio in New Jersey and has three children, Zachary, Kayla and Arden. Betsy is the owner/ director of Heartland Estate Staffing, with two children, Frankie and Brady. Kate has been running Raptors of the Rockies, in their 35th year of education with live birds, with husband Tom in Florence.

Although largely nocturnal, Sally loved her trips out with Kate and often Betsy, watching Ospreys and falcons from her lawn chair, binoculars around her neck and diet Pepsi in the cupholder. Sally could spot them. She and Kate made several road trips around the west, to Wyoming, Colorado and the Washington Coast, plus the Rocky Mountain Front and Glacier NP. Sally enjoyed old classic movies, figure skating, puzzle games and often tried her hand at solitaire until the wee hours of the night. She and Kate played Jazz CD’s on the old stereo for hours a day, Osc­­­ar Peterson her favorite, “Put on O.P.!”

With a wrye sense of humor, smile, good words and a welcome to everyone, Sally will be well missed by all that knew her. Sally Mom, our best friend.

The family would like to thank the excellent staff at St. Patrick Hospital, Riverside Health Care and Hospice of Missoula, saints all.

Posted by Kate Davis at 5:57 PM No comments:

Our Mom Sally passed last night, as she has always been nocturnal so what timing. Brother Jon was by her side at Riverside Health Care, all saints there.  Right after I got the 3 am call, our Saw-whet Owl Owen started calling, inside the house with well below zero temp outside. He knew, we knew, and a photo of Sally taken in the 1960's. Our best best friend of all time. 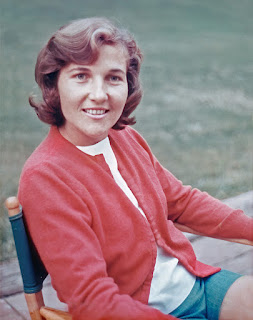 Posted by Kate Davis at 9:22 PM No comments:

My Mom has been in very ill health, an emergency room trip a week ago with terrible abdominal bleeding and in St. Pat's Hospital for three nights and now in Riverside Health Care. Saints All. We are all awaiting her last day, brother Jonathan from New Jersey here now, sister Betsy also with a health crisis, and me the oldest sibling. Poor Sally as she has been my best friend forever, constant companion watching Peregrines up the Blackfoot, and raptor trips all over the west including Washington, Colorado, and Wyoming when we picked up a new falcon years ago. She is resting in comfort care, in the best hands of all, and LOVE you, Mom! Her 88th birthday is next Monday, putting up with me and all of these animals since youth, happiest kid of all thanks to her and Dad and family. XXOO Sally Mom. 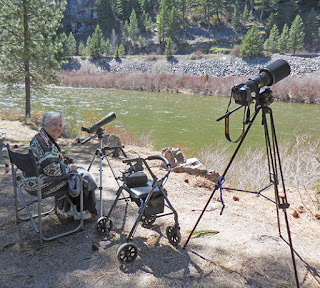 Today, and News On the Way 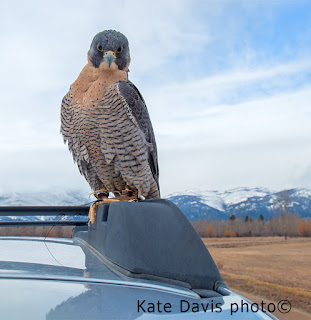 Posted by Kate Davis at 9:30 PM No comments:

On the irrigation wheel. 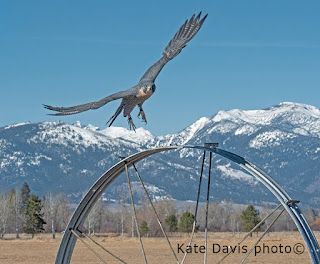 That is how it is spelled and not Feb-YOU-ary. What a diction snob I am...HA!  Oh, and Sib today. 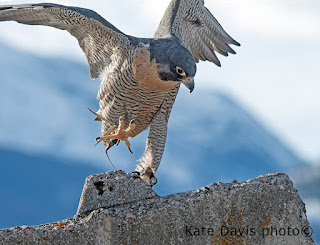 Posted by Kate Davis at 8:08 PM No comments:

I have seen this male Prairie Falcon several times in Victor, hunting birds this time of year and ground squirrels when they pop their heads up from below. Ground as in underground, not ground as in mince and shred in a blender, Steve. HA! 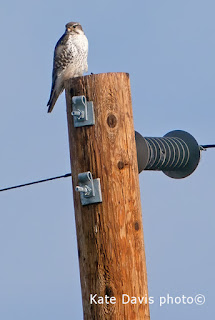 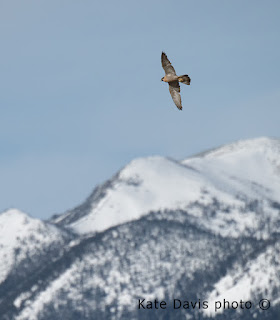 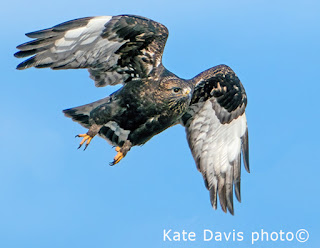 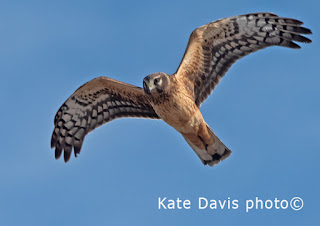 Painting Up a Storm

I finally had a break in duties yesterday and could stay home and paint a "Northern Saw-whet" drypoint etching for a show next month. The green background is rolled on ink in the original trip through the printing press, and the rest is gouache paint. On the screen is my original design, a composite of three photos and the right wing made up, with our Owen's face! This etching will be in the Missoula Art Museum Auction tomorrow, on line and starting at 6 pm. Bid it up art patrons, it's a benefit! Oh and that's Sonora the Aplomado helping out. 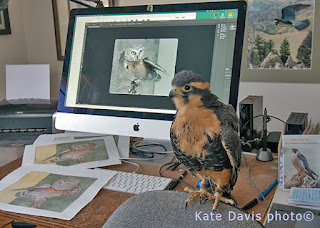 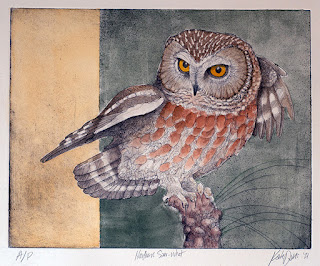