Singer, songwriter, author, artist Bill Harley filled the University Theater for a show yesterday. The packed house was about half kids, all enthralled for two hours and nearly 900 voices singing along. Today, the luckiest students on earth were at Bonner School enjoying two assemblies plus workshops all day, thanks to an arrangement from principal Mrs. Parks. Living in Massachusetts, Bill Harley has been a Missoula favorite for more than 20 years, with heavy airplay on Montana Public Radio's children's programming and a Grammy winning recording here in 2007. He told me he has visited over 2500 schools across the U.S. and yes, he is my hero. Here he is the Skunk Chief of Police telling Charlene the Skunk in the Middle that she has to set the table. The entire school was singing, "you're not the boss of me" in the cafeteria line afterwards. My sister Betsy was cracking up next to me in the bleachers, because she used to say that all the time as a kid. Check out his web site. We Love Bill!
Posted by Kate Davis at 3:46 PM No comments:

Letter from A Friend 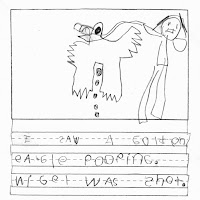 The Bald Eagle book is done (!), so it was time to clean up the desk and office. I came across this classic letter from a young student at Lowell School in Missoula after an assembly last year. Translation: "I saw a Golden Eagle pooping. Nigel was shot." An observant young man, and something he will never forget, I'm sure. Along with the eagle portrait, I especially like the depiction of my reaction, artistically rendered with just a few simple lines. I doubt I was frowning, though, and instead bet I was trying to direct the attention of the entire audience to the clock or basketball hoop when I saw what Nigel was about to do. You never know what will happen, so that's kept it fun for 24 years!
Posted by Kate Davis at 4:53 PM No comments: 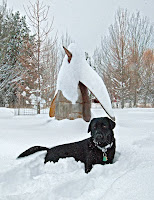 The last few days of snow have been heaven for skiers, and it's just a matter of getting up there for some of us. We are stuck in our collective driveways around here, the powder turning to heavy mush after light rain all day. At least we have enough pet food, bird food and human food. And a great excuse to finish up the eagle book, almost there! That's the penguin sculpture under all that snow. Later I'll take a walk up to the Post Office to mail my annual permit reports. And pick up a movie.
UPDATE at 4 pm: Book is finished! And plowed out, thanks to our pal Bob Tabke, with Tyler on the tractor! Life is so good.
Posted by Kate Davis at 8:13 AM No comments:

Current Conditions Across the Country 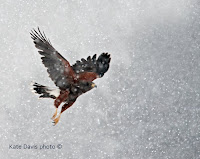 Well, across the west at least, and 8 inches of snow since this morning with no break in sight. Chesty the Harris's Hawk didn't seem to mind at first, then went back to her building to wait for some nice mice and part of a quail. Heated by the wood stove. Spoiled? Unbelievably, all the hype and predictions are coming true, and a great excuse to finsh the new book and veg out to some neglected Netflixes. "Missouri Breaks," anyone?
Posted by Kate Davis at 3:46 PM No comments:

Taking a break from writing, Sibley and the dogs had a fun half hour of exercise at the MPG Ranch. Here she is signaling me that it's time to put the camera away and get the food on the glove. I shoot a Nikon D700 and switch lenses, using a 80-400 mm zoom when traipsing about with a bird in the sky.
Posted by Kate Davis at 9:21 AM No comments:

Want to see what 480 kids, kindergarten, first and second graders looks like? These are the students at Hellgate Elementary School on the west side of Missoula yesterday afternoon. Principal Candy Johnson was a wonderful host, and the four birds including Max the Golden Eagle were "awesome!" Looking back in the records, our first program at Hellgate was in 1989, a generation ago and Candy was the principal. I think the school has at least doubled in student numbers, though, and all on their best behaviors for the birds. I'll print them a nice portrait of Alisa, the Hellgate Hawk, for the office.
Posted by Kate Davis at 9:02 AM No comments: 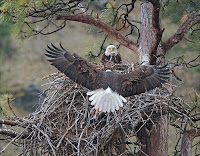 Yep. 10,000 copies printed and we are the selection for March, so for 31 days everyone will enjoy our Bald Eagle nest in Montana. Rob and Nick and I cover half the year, then cool shots of Swainson's Hawks and Harpy Eagles and WOW! We love the Peregrine Fund, and check out their web site, consider a visit to the Mecca in Boise, The World Center for Birds of Prey, and their new American Kestrel Project headed by Matt Giovanni.
Posted by Kate Davis at 6:42 PM No comments: 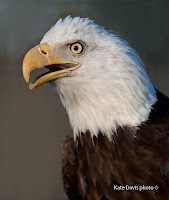 The deadline is approaching to finish, and happily writing captions for the new book on the Bald Eagle nest that was captured in photographs starting April 30th of 2011. 135 images installed and I like to call these sub-titles, being a film buff. Here's Number two: The stick nest in the Ponderosa Pine has been added to every year since it was first built in 2001. To the south and down a steep bank lies the Clark Fork River; the north side is a railroad grade and track, four lanes of interstate highway, and a housing development. Even with all of the hustle and bustle, this nest is a local secret of sorts.
Posted by Kate Davis at 6:14 PM No comments: 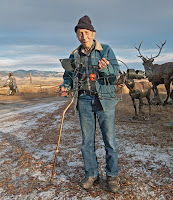 Our favorite artist celebrated his birthday yesterday, and we were thrilled to be included in the celebration. Bill Ohrmann and wife Phyllis of Drummond hosted a spontaneous get-together at his Gallery and Museum, the finest spot to view welded steel sculptures of animals, oil paintings of his controversial views of the west, and wood carvings. If you haven't stopped by his "Usually Open" mecca, you must! Bill turned a 93 years young on Monday, and here he holds a raccoon I made for him after he taught me to weld, a heart recently installed in the center. Bill places hearts in every one of his sculptures, and make sure you climb up the step to see the one in the metal 12 foot running wooly mammoth, the most amazing piece of art in the world. And give him a little hug!
Posted by Kate Davis at 7:59 PM 1 comment: