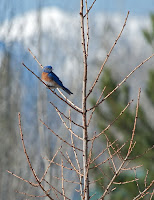 Not fair to post this spring photo from last year, I know, but that season could be around the corner. We had a singing male Red-winged Blackbird then a Black-capped Chickadee with that two-syllable call announcing change, first for the year just today. The photoperiod gets these guys going, as well as those folks that are tired of winter (not me!) Weather predictions are for two feet of snow in the mountains this week, great for skiers. March is always known by the saying - in like a lion and out like a lamb. Or better yet, in like a Rough-legged Hawk and out like a Peregrine Falcon!
Posted by Kate Davis at 6:10 PM No comments:

Yesterday, I noticed dirt flying in the backyard and found this Northern Flicker's head poking out of a hole in the ground. She was digging out a big ant hill, and had drilled almost a foot down in the loose soil. She'll have to find another food source in the next few days with "winter storm warnings," "powerful arctic storm," and high winds, sub-zero temperatures. Looks like we'll have some birds back in the house soon!
Posted by Kate Davis at 8:34 AM No comments:

It Keeps On Coming 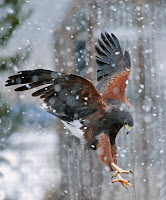 Those Montanans that pine for warmer clines were teased for a while when temperatures were in the 60's last week and the snow and ice in their yards all but disappeared. I could imagine some gazing longingly at their rider lawnmowers, visions of iced teas on the veranda. Then back it came, winter and what do you expect? It's February. Chesty loves the stuff, and a photo from an hour ago. Boy oh boy, the skiing will be legendary! Get psyched, and leave the lawnmowers in the garage for a few more months.
Posted by Kate Davis at 2:04 PM No comments:

Degas is Pretty as a Picture 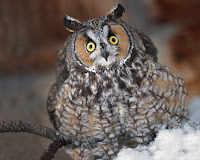 We had been caring for this bird since November, the luxury of having a big enclosure vacant at the time, and he is now on our Education Permit. Our latest teaching team member Degas is a one-year old Long-eared Owl that was found last fall at near-by Lee Metcalf National Wildlife Refuge with a badly broken wing. Once again, rehabber Judy Hoy to the rescue with splints and tape and voila, nearly as good as new but with some soft tissue damage. For now he will be an educator, but with exercise, a molt, and a tiny miracle, he may be releasable. I got this photo on Thanksgiving, a day I was thankful to have this healthy (and spunky) young owl in our care. His name Edgar Degas is that of my favorite French impressionist painter. He looks like a lovely rendering in pastel or oils.
Posted by Kate Davis at 3:37 PM No comments:

An Artsy Photo From Keri 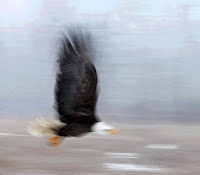 Keri Petrilli got this snapshot of the Bald Eagle release, for you folks that like a different slant on wildlife photography.
Posted by Kate Davis at 5:44 PM No comments:

Our big eagle enclosure came in handy recently, housing this Bald Eagle for a week before cutting her loose at the Raptor Ranch. Probably struck by a car, she was retreived near Hot Springs by Dale Becker, director of the Wildlife Program at the Confederated Salish and Kootenai Tribes, and brought to us. She jumped out of the kennel and joined Max and Nigel the Golden Eagles on their tall perch, so recovering nicely from that probable concussion. Our boys looked puny next to the new eagle. At day six, Rob Domenech, director of Raptor View Research Institute came by to take measurements and collect blood to test for lead poisoning, and neighbor Keri Petrilli got these great shots of the whole process. With the hood off, she flew straight into the wind and snow and disappeared up river. Rob reported the USGS band number on her leg and found this out: She was caught by biologist Riley McClelland as a young of the year on McDonald Creek in Glacier National Park in 1986. He fit her with a tail radio transmitter, and she spent her first winter around Kalispell on the Flathead River. She migrated back to her "natal" ground in Saskatchewan that spring, where she molted those tail feathers and the transmitter was recovered on the 4th of July. So a whopper at 12 1/2 pounds, a Canadian import, and one with a great history and successful release. And 25 years old!
Posted by Kate Davis at 9:28 AM 1 comment: 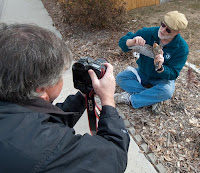 As a grand finale to our three days of Gyrfalcon papers at the Boise Conference, we were treated to viewing another northern hemisphere falcon, the Merlin. Our good friend, biologist Bruce Haak has been studying local Merlins for over a decade, and Rob Palmer and I accompanied him on an urban trapping expedition. The subtleties of the three sub-species identification is confusing for most of us, but Bruce has it down to an art. He caught this male Black Merlin (suckleyi) right away, and showed us their characteristic plumage traits. Definitive feature - on their last primary feather (number 10) the white spots don't extend anterior to the rachis, and are present on the main part only. Got it? You will be quizzed. Thanks Bruce, and we'll be back.
Posted by Kate Davis at 10:28 AM No comments:

We All Flock to Gyrfalcon Conference

About 120 people interested in Gyrfalcons, ptarmigans, and climate change converged at Boise State University in Idaho, a rare combination of experts in raptors, grouse, habitat monitoring, and weather prediction. Sponsored largely by The Peregrine Fund, about a dozen countries were represented, including Alaska (little joke.) Here, Svetlana Mechnikova of Russia discusses changes in populations and nesting ecology of Gyrfalcons in Russia, complete with headphones and a translator for the anglos. It was almost like being at the U.N. She touched on a nest box program, and Nick Dunlop's question at the end was the best of the week: "How can we help fund your project?" A blushing Svetlana shyly accepted all of the $20 bills from attendees after her talk, promising she'll let us know how it goes on the Yamal peninsula on the other side of the globe. One of the best conference I've ever been to, and thanks to the speakers, organizers, and new and old friends.
Posted by Kate Davis at 12:02 PM No comments: