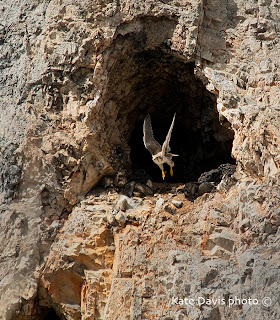 Two Prairie Falcons were checking this hole as possible nesting site today, my best pals Sharon Fuller and birthday celebrant Jay Sumner along. We had Peregrine occupancy at two nests on the Clark Fork, and the best of birthday gifts for Jay. We'll sure be checking on this nest all spring, camera in hand.
Posted by Kate Davis at 8:28 PM No comments: 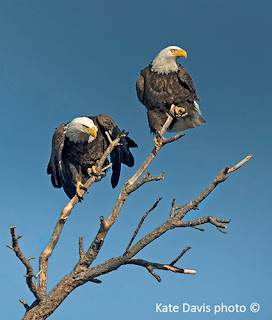 What a day, with all of our Teaching Team eagles screaming well into the night, young and old Bald Eagles flying through the yard, and these two on the beach. Photoperiod (the length of day and night) tells everyone that is time to think about breeding, and poor Ansel the Gyr/Peregrine hybrid has a nest, or scrape depression in the corner, going now. No babies for him, living with Alisa, the Red-tailed Hawk. Sorry, Ans. Sib next door laid 9 eggs one spring, of course infertile, and hope she doesn't do that again. Spring Has Sprung.

Posted by Kate Davis at 8:42 PM No comments: 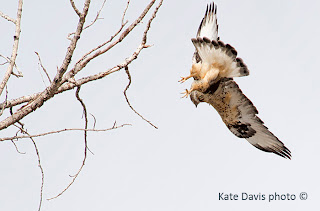 Rough-legged Hawks are winging their way back north to the tundra of Alaska and Canada after wintering here and supplying lots of raptor ID questions. This one cracks me up, posing for a while and then baling out of the tree when I got out of the car. Hey! Saw my first Peregrine of the season today up the Blackfoot, with Jay Sumner, Montana Peregrine Institute. It just gets better and better now.
Posted by Kate Davis at 6:49 PM No comments:

Thanks Everyone For Our 25th Anniversary!

A great celebration at Bayern Brewing last night, merci! And a fun program for the Montana Bowhunters Convention this morning. Glad to know that all of those new Bald Eagle books are in the hands of literate, bird-loving, raptor enthusiasts! So here is this evening's photo of the male eagle on the beach behind the house swallowing a Columbian Ground Squirrel leg, a magpie hoping some viscera would spill down. No such luck. 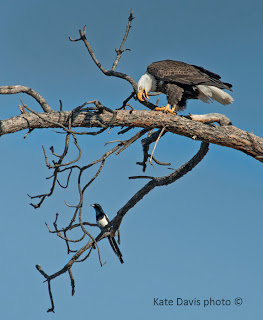 Posted by Kate Davis at 8:07 PM No comments:

I See a Pattern Developing 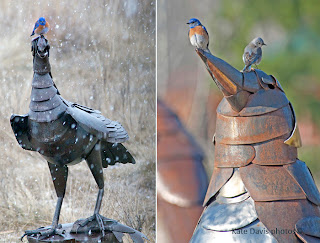 I just realized that bluebirds have an affinity for steel. These are all the first ones spotted at the Raptor Ranch in the spring...weird.
Posted by Kate Davis at 3:29 PM No comments: 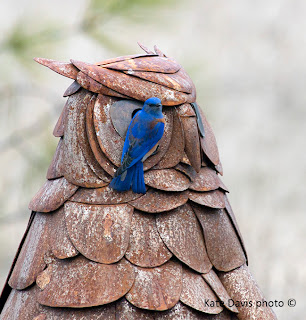 How fitting that we catch a glimpse of the first bluebird of the season on the first day of spring. This guy is just back from wintering south and perhaps missed our biggest snowfall of the season here in Florence - yesterday!  A Western Bluebird male was checking out my metal Great Horned Owl sculpture in the yard, thinking perhaps it was a fancy nesting box. Dozens of those real (wooden) ones line the property. Help out swallows, bluebirds and kestrels with a nest box today! We have the former available for friends, but please tell Matt Giovanni at the Peregrine Fund that you are interested in American Kestrel boxes soon, mid-April should be right on time around here. Or contact me and we'll see what we can do. 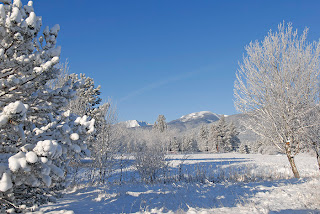 Florence was the snow capital this morning with 5 inches, and melting fast. Should be 50 degrees by the end of the day, nearly 60 tomorrow. Here is our front yard, Kootenai Crags in the background. I'll post another shot from this same spot when the aspen leaves are in full swing. This photo is for you, Stacey in California, and Carmen in Puerto Rico!
Posted by Kate Davis at 11:31 AM No comments: 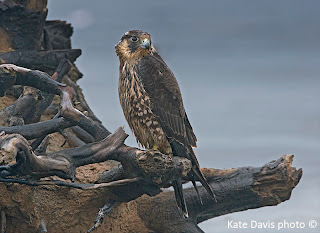 ...from the ocean, and this a soaking wet, one-year old Peregrine Falcon. Beautiful bird! Maybe my favorite image ever.
Posted by Kate Davis at 11:30 PM No comments: 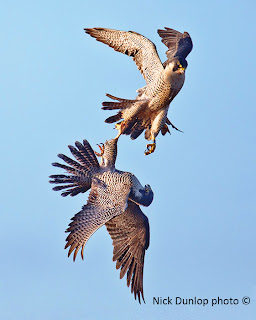 Check it out, our pal Nick got this photograph of the Peregrines duking in out, and I was fumbling with camera settings and missed it. What a treat to have Nick and Rob with us, and see all of the Peregrines and Bald Eagles on the Washington beach.
Posted by Kate Davis at 7:11 PM No comments:

The Guys on the Beach 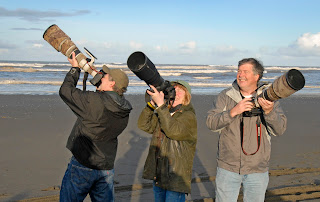 Nick Dunlop, Yours Truly, and Rob Palmer waving our cameras on the Washington Coast beach last week. We were doing a group shot, all of us pointing different directions as a joke at the suggestion of Nick when, no kidding, a Peregrine flew right overhead and then the real shooting began. Coastal Raptors had just released a Gyrfalcon that was trapped, and what luck. That first Peregrine was joined by another and then the aerial battle began, shutters blaring like machine guns. It was all over in minutes, and the falcons headed out over the waves, cacking and scrapping, fleeing from the paparazzi. The throngs of beachcombers were dumbfounded, walking by and either thinking we were all crazy or perhaps, not paying any attention at all and never looking up above the sand at their feet. Note: always scan the skies. You never know what will fly by.
Posted by Kate Davis at 5:18 PM No comments:

Spring is In the Air 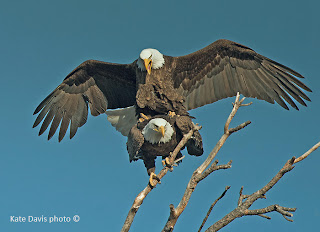 Last night I made a dash to the beach with the dogs, both eagles in the same tree, only to have one fly when I was half-way down. Then this spectacle, before I even had a chance to set up, the camera just laying in the tripod and not attached... Always have your camera and tripod set and ready to go at the drop of a hat. Words of wisdom to live by, right Nick? The first time I saw his camera and 500 mm standing upright on the floor by his front door I cracked up, but now, the same scene in our house. I got a dozen shots like this, lucked out I'd say. Then off to incubation duties she flew.

Posted by Kate Davis at 5:02 PM No comments: 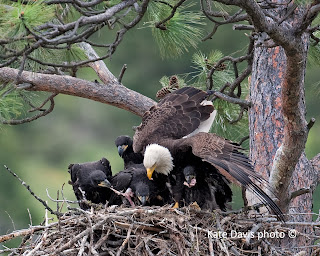 Listen to the latest "The Write Question" now,  29 minutes of chatting about the Bald Eagle book with host Cherie Newman on Montana Public Radio. She used her magic "editing wand" to pare the show down from over an hour of interviewing and what a fine job! The show airs here, Yellowstone and Spokane Public Radio and now, the four corners region of Colorado. Thanks to everyone that has sent their compliments, and  so glad to get the word out there.
Posted by Kate Davis at 12:08 PM No comments:

Tonight, Tomorrow, The Next Day 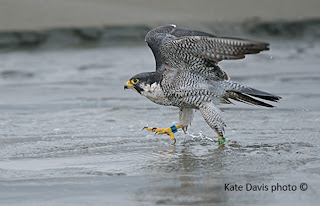 Check out "The Write Question" tonight at 7:30 with Cherie Newman - Montana, Idaho and Colorado Public Radio. We discuss the Bald Eagle book, KUFM 89.1 in Missoula. Then Friday at 7:00 pm, an artists/photographers' reception and PowerPoints from all of us at the Holter Museum in Helena. What fun. Then Saturday a free Raptors of the Rockies program for all ages, live birds, starting at 10:00 am. at the museum downtown. THEN at 12 or so, a sketching session for the kids with our birds as models. Action packed lately. Might have to go skiing on Sunday!

Peale's Peregrine on the Beach 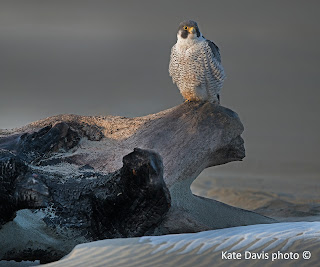 This photo (and bird) is about my favorite from the recent trip to Washington, and I know Rob Palmer and Nick Dunlop got the same thing, all three of us "shooting" from the Jeep on the beach. It was first thing in the morning, frost in the shadow, and the famous male Peale's Peregrine, WZ. I has leaning across the front seat from the passenger side, 500 mm lens on the open window, what a sight!
Posted by Kate Davis at 9:47 AM No comments:

Back From the Coast 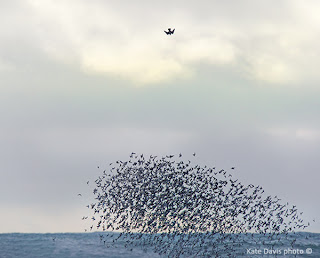 What a fantastic trip to the Washington Coast, thanks to Dan Varland, Coastal Raptors, and some cooperative weather and birds. This was my second year to participate in what Dan calls "March Madness" and he hosts board members, donors, and me, Rob Palmer and Nick Dunlop for four days on the beach. This time he even caught a Gyrfalcon, one that he had trapped and banded seven years earlier TO THE DAY! Here is a Peale's Peregrine stooping on a ball of panicking shorebirds, and he scored! We got photographs of him bathing, eating, perching..hundreds of photos of "WZ" - the letters on his band. More on the way.
Posted by Kate Davis at 1:24 AM No comments: