A Return Visit and Milestone

Our friends from Nkwusm Salish Language School of Arlee paid us a visit today, third year running, and finally better weather. Here, they are piling around the penguin sculpture after the tour. The boy on the left is flipping through a book that they gave us last year, "Birds of the People's Land," a guide of our native birds written in their beautiful native language. After our guests were safely back in the bus and vans, Chesty the Harris's Hawk flew circles around the yard and caught tidbits thrown in the air, cheers from all. The milestone is that the visit from Nkwusm was one of or first blogs one year ago, back when I'd never heard of Facebook and Twitter! Check out some "older posts" from this older Executive Director.
Posted by Kate Davis at 5:18 PM 1 comment:

Friends gathered at Bayern Brewing on Saturday to celebrate 22 years of education, and to meet the new Red-tail, Alisa. Photographer Keith Fialcowitz captured the action, as Board Member Kathy Heffernan recounts some highlights over the years. I had PowerPoint and YouTube films running non-stop on the big screen, and what a great place to have a party! We also thank Famous Dave's Barbecue for the wings (what else could we serve?)
Posted by Kate Davis at 8:36 AM No comments: 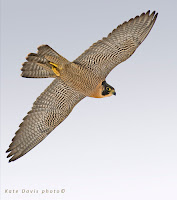 This shot of Sibley the Peregrine checking me out won the IAATE Photography Competition 2010, Action Category, and will be in our new book for Mountain Press, Raptors of the West. Two other photos won Honorable Mentions - the portrait of DotCom (blog July 26th) and Barred Owl we released last fall (blog Nov. 26.) Check 'em out!
Posted by Kate Davis at 12:44 PM No comments: 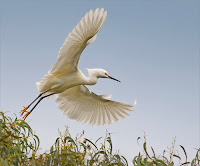 My photo from last spring of the nesting Snowy Egret just won the Best in Show for the IAATE photo competition 2010 -International Association of Avian Trainers and Educators, at the conference in Albuquerque. Next, the First Place Photo - Action category...
Click here to see the web site.
Posted by Kate Davis at 1:01 PM 1 comment: 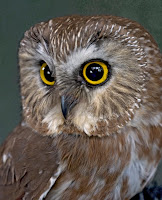 Back in 1989, when still in Clinton and 5 Subaru's ago, we met a woman that was enthralled by wildlife and we invited her over to see the birds. She adopted Bobo our first bird, a Great Horned Owl, and we had our first official "Raptor Backer." Peg Hampton became a dear friend, and we would fall in and out of contact over the years. Yesterday, she brought her great granddaughter Ariana over to choose a bird to adopt for her 11th birthday! That's four generations that have adopted raptors as gifts, and as I recall, all owls. Ariana had a hard time choosing, and almost picked a hawk (Chesty) but opted for the little Saw-whet, Buster. She'll have this photo to hang on her wall back in South Carolina, and maybe bring her kids over some day.
Posted by Kate Davis at 11:03 AM No comments: 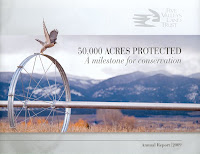 My photo of Sibley jumping off an irrigation wheel in the Bitterroot just made the cover of the annual report for Five Valleys Land Trust. We love these folks, and they are celebrating an amazing year, raising $500,000 to protect clean water, wildlife habitat, working ranches and scenic landscapes in the area. Two thousand copies of the colorful report were printed and consider joining the FVLT family if you haven't already done so. As an aside, I entered this photo in a competition back east and several people asked me what the heck was up with the wheel. A ride in an amusement park? I am not kidding.
http://www.fvlt.org/
Posted by Kate Davis at 1:09 PM 1 comment:

Art teacher Feather Sherman and I finally had our Birds And Art day yesterday, with 43 creative students at the Missoula International School. Alisa the Red-tail, Buster the Saw-whet, and Miles the Great Horned Owl posed for sketching sessions, and the resulting sculptures will be displayed at the International Wildlife Film Festival. Thanks Elizabeth McCubbin for sponsoring the program. I had a little lesson in current pop culture from the older students and walked away feeling really un-hip. Oh well, it's too hard to keep up with that stuff.
Posted by Kate Davis at 8:03 AM No comments:

Our falconry season has drawn to a close, as spring moves in. What began on September 1st has been a nearly daily flight of Peregrines after game for Jay Sumner and me. Yesterday it was clear that the dangers outweigh the thrills, as thermals carried our birds nearly out of sight. Spiraling up with the falcon was often a flotilla of other raptors, hawks and especially eagles that can pose a threat when the bird knocks down a duck or pheasant. The Peregrine could be killed by the "kleptoparasite" or thieving eagle. Unlike other game bird hunters, we don't put our shotgun away in the closet to be dusted off in the fall. Instead we keep our birds happy and well fed as they undergo the molt, then back at it in six long months. And thus begins wild Peregrine nest monitoring!
Posted by Kate Davis at 8:58 AM No comments:

"Winter Has Been Cancelled"

My pal and ski partner Kim informed me of that last week and she is in the know, working as an aircraft dispatcher for wildland fires. Meteorology is major news around here, and the latest heat wave has hit. Our Harris's Hawks (Deja the tough old bird to the right) have red 100 watt bulbs over their nighttime roosts and heated perches, and yesterday they were unplugged for the season. The lamps were removed, extension cords rolled up, and all stashed away until next winter. I usually wait until SnowBowl ski area closes, so way early to give up on winter. As Kim would say, time to break out the fly rods, and we've already seen a few caddis fly hatches and 60 degree weather!
Posted by Kate Davis at 8:08 AM No comments: 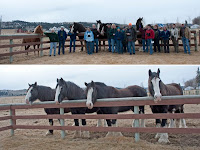 Executive Director of Montana Audubon and noted raptor expert Steve Hoffman (here in the orange cap) treated us to a Saturday in the Bitterroot Valley hawk-watching. Also in attendance was Rob Domenech of Raptor View Research Institute, and let's just say that we had a few friendly disagreements on bird ID, all resolved as the hawk/eagle in question flew close by. The most numerous hawks of the day were the Rough-legs, and we could compare male and female, young and old plumage. Plus we got to pet some horses at the Stock Farm. Get your calendar out right now and mark down June 4, 5 and 6th - the Montana Audubon Bird Festival in Missoula. More news on the way!
Posted by Kate Davis at 8:50 AM No comments: