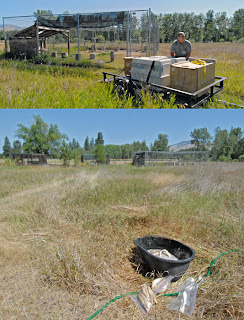 No fun photos today, and just documenting the transfer of three Bald Eagles and one Golden Eagle from a raptor center that is closing. Fish and Wildlife Service Agent Rick Branzell delivered the birds this morning and so far, so good. I mowed the grass and installed a hose so no grass fires when the truck drove through the field, moved our Swainson's and Rough-legged Hawks to the rehab building, and crossed my fingers. We installed the eagles at 11 am, and have decided to swap two tomorrow. The real challenge/job/crap was re-packaging all of the thawed out fish donated from the center, washing them in a tub, sticking them in new zip-lock bags from the local Ace Hardware, and then into five apple boxes from the IGA. Then into Missoula and up on shelves at H & H Meats at 3 pm. Plus I have to get a tarp or something up in the south-east corner for shade for our resident birds, and get a veterinarian over here to document that they are non-releasable.  And hope they all don't kill each other at feeding time tomorrow morning. All of these birds will go to native American aviaries in Oklahoma who collect the molted feathers for cultural ceremonies, great facilities for the future for these guys. In the meantime, they are keeping me on my toes, seven eagles at once here, but at least the fish is in the freezer!

Posted by Kate Davis at 6:13 PM No comments: Montana Peregrine Institute's director Jay Sumner reports with an exclamation point, "We made it: 100 active Peregrine territories in Montana this year. 184 young and still counting!" This has always been a magical number, and I can remember saying in the olden days, "Some day I bet we have one hundred." Prior to 1984, zero in the state and five years ago, just 68 nests. Of course there are lots more in remote country, but I must say, Jay conducts the most thorough survey humanly possible. He looked at over 180 cliffs himself, spending 30 hours total at one particularly vexing nest in the Flathead and never did get both adults. Peregrines tend to nest on cliffs over waterways, usually bordered by roads, so easy access to most. And with Google Earth, we can pick likely spots from a chair in the office. I must say that Our Bitterroot Valley now re-takes the record, inching past the Bighorn and Clark Fork drainages, with 15 Peregrine Falcon nests! Way to go, team.
Posted by Kate Davis at 4:01 PM No comments:

Check Out THIS Nest

Perhaps you have been watching breeding action via nest web cams on your computer, so this is a reminder of Project Osprey. This camera streams live 24/7 from an Osprey nest here in Missoula at Riverside Health Care on the Clark Fork River. Today the chicks were banded and Dr. Erick Greene assured me that they have enjoyed over a million hits to this web site since it was launched through the Cornell University Lab of Ornithology this spring. The male is a "stud," often delivering fish to feed the family before it is even light in the morning, nine fish one day to the three young and female. What is so amazing is that he is a "floater" or unmated adult that just showed up after the original male disappeared, and she laid eggs very late in the season. That bird may have been killed by a Bald Eagle, arch enemies of all time, as eagles routinely steal fish from Ospreys.  This photo displays one Osprey that just got fed up and split after initiating a battle in the sky over the Bitterroot River last week. We are all watching the web cam and Facebook page, so join the fan club!
Posted by Kate Davis at 7:35 PM No comments:

The Nest Across the Road 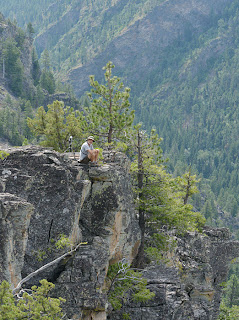 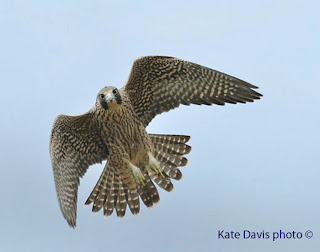 Peregrine Falcon nest survey season is winding down, and always a grand finale at One Horse Creek across the road. Every year, Mac Donofrio and I have lucked out with young birds bombing around and this year was even better because Adam Shreading of Montana Peregrine Institute joined us. I assured them both that we'd see adults and young right away (wishful thinking), and stated with such authority and confidence that they believed me. "Oh yea, done by noon, then go float the Blackfoot..." The falcons must have heard me because that's what happened - two young chasing their mother, photos of Mac on the cliff and the young female Peregrine checking me out, undoubtable the first human she had ever seen. I was honored!
Posted by Kate Davis at 4:56 PM No comments:

Action On The River 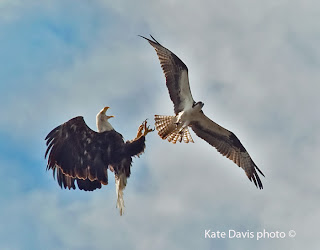 A big raft float today from Stevensville to our house in Florence and instead of the fly rod, I opted for the D700 Nikon and 80 to 400 mm lens. Perhaps a good choice as these two raptors were squabbling overhead, Bald Eagle and Osprey. We were also treated to about 20 Lewis's Woodpeckers catching insects in the air. No one can complain about this great weather of late!
Posted by Kate Davis at 8:47 PM No comments: 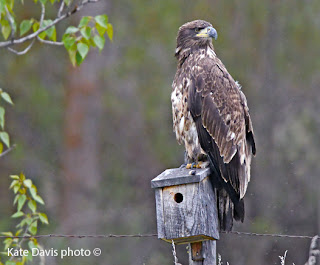 Always trying to think of ways to help out our bird community, we decided to start manufacturing Bald  Eagle nest boxes, to be ready for the 2013 breeding season. With long lives and pair bonds, "your" eagles may return year after year, with the young fledging in early July. We'll include instructions on placement and even some wood shaving to put inside. Order now, from your friends at Raptors of the Rockies.
Posted by Kate Davis at 8:21 AM No comments: 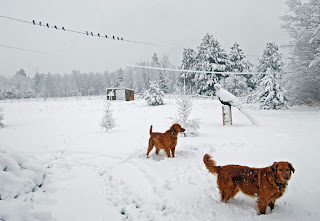 For all of those suffering through the summer heat, currently pushing 100 degrees here and 106 in Boise at the World Center For Birds Of Prey right now, everyone should remember that the good season is coming up, WINTER!  I remember my dad, being the avid skier, had a bumper sticker that said "Stamp Out Summer." Lots of folks have asked me how our birds are faring in the heat and two words: shade (thanks to all of the trees, bushes, and vines planted) and water (bathes filled every day, some twice a day.) And we have frozen mouse popsicles. A photo of dogs and pigeons and the big pheasant sculpture covered in a ton of snow.
Posted by Kate Davis at 7:31 PM No comments: 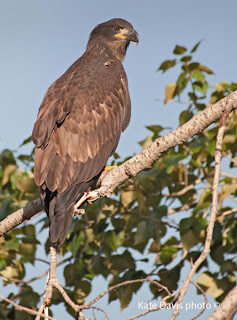 This young Bald Eagle allowed me to approach and get a snapshot, one that had fledgling from the nest across the river. He and his sister were soaking up some Bitterroot River water this evening, and didn't mind the dogs and camera. More shots on the way, and so darned exciting!
Posted by Kate Davis at 9:42 PM No comments: 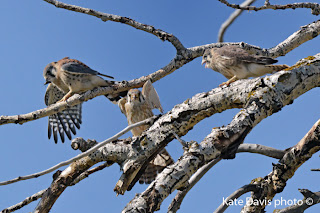 In a few hours of observation I could locate five young kestrels at one time, six in the tree briefly but one might have been an adult. They are flying around the little grove of trees now, but seem to come back to the big cottonwood as home base. Early on today, the male brought in a big vole and two playing tug-of-war dropped it, never to be seen again on the forest floor. In this photo, the female brought in a cricket and the male on the left scored! A flurry of activity is often followed by quiet whining for food and preening, and a challenge to count all of the falcons tucked away everywhere, like ornaments on a Christmas tree. What fun.

Posted by Kate Davis at 2:21 PM No comments: 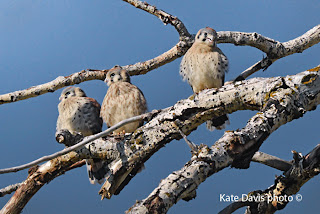 American Kestrels may have five young if they are lucky and productive, but I swear, today I counted six little short-tailed falcons in the cottonwood tree by the nest. These fledglings were calmly awaiting another food delivery, and the adult male produced a nice vole, which of course, I blew as a photograph. Here are two males and the female in the center, and we wonder if the size of the nest cavity dictates brood numbers? I see a post-graduate paper here. One youngster was crashing through the limbs and apparently not so great at flight, so I just went back to see if he was on the ground. Mookie the Labrador dog and I couldn't locate him, so if that was the case, hopefully safe in the tree somewhere. We had a huge squall and rain storm just now, but back in the morning to see if I can prove that six kestrels made it out of that nest for you doubters. HA!
Posted by Kate Davis at 7:08 PM No comments:

Everyone Fledges At Once 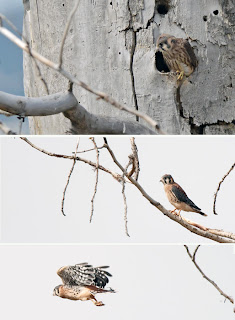 Months poised in front of nests in the area came to a crescendo when the local American Kestrel and Bald Eagle young all fledged yesterday. Top is one of the female falcons about to bail, and the young male below's first ever flight. I had been standing and peering through the camera viewfinder for an hour and just reached down to pet Mookie the dog, only to look back see the male had popped out without a photo, oh well. He crashed into a cottonwood tree and I left in frustration of having missed it. Then, back at the house one of the three Bald Eagle young leapt into the air for her first flight, an image I will never forget but through the spotting scope in the living room. We wish these new predators luck, and back at it with the Nikon tomorrow.

Posted by Kate Davis at 7:10 PM No comments:

New at the Ohrmann Museum/Gallery 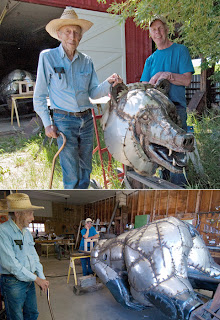 My hero and mentor, Bill Ohrmann told me he was working on a new metal sculpture and I finally got to go see for myself. Theoretically, Bill at age 93 should be kicking back, playing bridge, watching NASCAR on TV....but no! He has nearly completed a giant Brown Bear which, with the head installed and they stand him up, reaches about eleven feet. What a look on that face (the bear, I mean), and he has already installed his signature - a metal red-painted heart inside. Bill tacks all of the hundreds of pieces to the frame, which is like a skeleton, and son John welds each one in place; quite the team. A masterpiece and I suggested that it would look great in our yard. Instead, give him a week or two and check it out for yourself along with the myriad of other sculptures, woodcarvings, and paintings ("something to offend everyone") at the Ohrmann Museum, "Usually Open" and three miles up Scenic Highway 1 from Drummond. I was so inspired I started a sculpture of my own, half that size though. And a bird, surprise, surprise.
Posted by Kate Davis at 1:55 PM No comments: