The Raptor Round-Up should be in the mail next week, but hold on, a little delay this issue. First, the new book for Mountain Press Publishers is on the front burner, with the deadline in just over two weeks. Very do-able as they say and right now we are featuring 421 photographs, including this brand new Burrowing Owls image from Rob Palmer. Just a hint at the quality of photos, and along with me and Nick Dunlop, we have several guest photographers to be announced. Secondly, I had surgery on my right (write) shoulder yesterday. House-bound for ten days, so plenty of time to work on the book, with no distractions of chasing Peregrines around. All this from a ski wreck in January and "impingement syndrome." I thank the good folks at Missoula Bone and Joint for fixing me up. Think I'll drop off the Raptors of the West book for their waiting room when it hits the bookstores this holiday season!
Posted by Kate Davis at 7:20 AM No comments:

Back to Our Favorite Osprey Nest

Heiko Langner and Erick Greene decided to revisit the Hellgate Osprey nest and take a final blood sample from the chicks before they fledge. This is essential to determine how the mercury levels change as the birds grow. I was lucky to come along, with family in tow. My brother Jonathan and son Zach Phillips were in town for two days and got a bucket ride, as did my nephew Brady Needles. This nest has been made popular through our newsletters and blog, as the platform was installed in 2007 by Northwestern Energy. My friend Karen Wagner (whose mother was a resident) and I wanted the folks at Riverside Health Care to enjoy the birds close-up. Now Heiko and Erick have added a web camera, and residents inside (and you) can see the nest live: Project Osprey Webcam
Click the "live peek into the nest" link below the photo. And, the Missoulian newspaper had an excellent article last week, so check it out:
http://missoulian.com/lifestyles/recreation/article_0e59ebf0-9522-11df-9f43-001cc4c03286.html Next year we will have a better camera and video feed, fundraising campaign coming up! Save your pennies. Here is Erick reinstalling the growing chicks with a smile.
Posted by Kate Davis at 1:07 PM No comments: 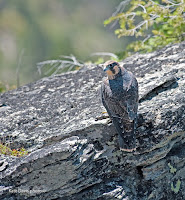 Last week Mac Donofrio and I returned to One Horse Creek across the road in hopes of seeing fledgling Peregrines and getting an accurate count. Our efforts were thwarted and we just heard one scream for a second. But not today and we can say with confidence, three babies. With nothing going on, Mac was looking at my house across the valley through the spotting scope and a bird flew through his field of vision. A fledgling Peregrine quietly found a nice snag perch in the distance. A half hour later the big show started as that bird was joined by his sister, then a third exactly in between the two in size. Male? Female? Male ? Who knows. Anyway, they flew around us screaming and playing, then this one landed next to us, thirty feet away! The spectacle continued, kids playing with no adult supervision, scrapping and diving, noisily honing those flying skills, and a sight I'll never forget.
Posted by Kate Davis at 2:17 PM No comments:

Grown-Ups Are Artists Too

We held our second workshop for adults yesterday at the Missoula Art Museum, Birds And Art for Grown-Ups. Instructor Bev Glueckert and I have held classes for kids for about 15 years, and parents complained that they were left out. Sibley, Alisa, and Miles Davis were our models and we were honored to have a special guest from the Plein Air Painters, Mike Untiedt from Denver. He filled us in a bit about being an artist as a profession, and did some sketches of Alisa. He admitted that it would be nice to not have the pressure of making sales, no surprise. I guess that's me, with all of my metal sculptures in the yard and house, and none for sale! I covet A Michael Untiedt original, that's for sure. And, these workshops for adults will be on the schedule twice a year, so keep in touch.
Posted by Kate Davis at 9:41 PM No comments: 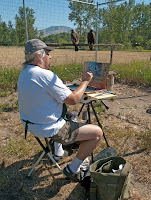 What does that mean, en plein air? It is painters from around the region landing here this morning at 8 am and spending the day painting our birds in the out-of-doors on perches in the yard and in their enclosures. This was a brainstorm three years ago after I ran into several folks with French easels set up at our local fishing access painting landscapes in Florence. I asked what they were doing and they were proud to say that they were with the Dana Gallery in Missoula. One gal came over here because she needed more painting panels which I could supply rather trying to get to an art store. As she pulled up, Chesty the Harris's Hawk was perched on the power pole in the driveway, and she exclaimed, "What IS this place?! Does he live here?" pointing at the bird. So we got this idea to do a workshop here, and Candice and Dudley from Dana had 9 painters, 5 writers, the Missoulian and Independent newspapers and 2 videographers here today. The photo is of Mike Untiedt of Denver, CO in with the eagles, and all of the paintings will be displayed at Dana Gallery for a month, but I'm buying this one so hands off! Check the video by Matt Riley at the Missoulian:
Video called Raptors En Plein Air
Posted by Kate Davis at 9:12 PM No comments: 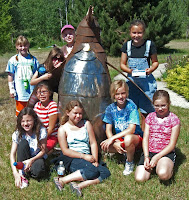 We were so happy to again host a visit from the GUTS Girls, or Girls Using Their Strengths. They informed me right away that if we had boys over instead it would be called BUTS and not very flattering. The day began with a visit to the pigeon loft, and ended with a discussion of why all of the eggs laid by our falcons, hawks and owls this spring won't hatch. Wish you could have been here for my explanations to this wonderful group of ten year olds.
Posted by Kate Davis at 9:39 PM No comments:

Osprey Cam Is Up LIVE 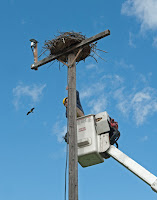 Heiko Langner has spent hundreds of hours working out the glitches and has gotten the feed from the Osprey Cam live on his web site! Learn more about Project Osprey, check out the chicks, see their growth and feeding since the camera was installed, and great work, Heiko!
Just click on the link below the main photo called "Live peek into the nest." The babies are getting banded today!
http://www.umt.edu/geosciences/faculty/langner/EBL/Osprey/index.htm
Posted by Kate Davis at 7:56 AM No comments:

We were happy to help out with Project Osprey when they put a digital video camera in the nest at Riverside Health Care on the Clark Fork River in Missoula last month. Project heads, Heiko Langner and Erick Greene at the University of Montana have been monitoring Ospreys in the area for four years, banding babies and taking blood and feather samples to check for toxins. They wondered what types of fish were being consumed, and thought about using a camera to see. Heiko came up with this impressive set-up, installed thanks to NorthWestern Energy (you can see us up in the bucket truck in the shadow in the grass.) Powered by the solar panel attached to the pole, Heiko calibrates his computer below, U of M Grizzly stadium in the background. NW Energy erected this platform at our urging in April of 2007, and only had an Osprey pair last year. We knew that the residents at Riverside Health Care would enjoy watching these "Fish Hawks" from their patio, often crowded with bird lovers, this year rooting for two babies and parents.
Posted by Kate Davis at 5:16 PM No comments: 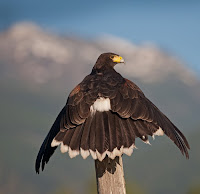 Deja showed up this evening as I was returning from town. Three birds and I were on a live NPR radio show, the Pea Green Boat children's programming, which is broadcasted all over the state and on the web too. Dej was standing on her building, a big wound on her face as she must have had an interesting night out. She is now enjoying a meal and bath in her building. Whew.
Posted by Kate Davis at 8:35 PM No comments:

Advice From the Man 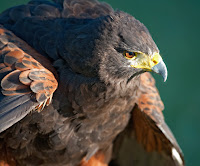 Rob Palmer and I were swapping book photos yesterday, and I realized we needed a Harris's Hawk portrait. Deja was our subject, on a perch in the yard at high noon, and I sent an image to Rob. Right away he was on the phone telling me NEVER shoot birds in that harsh sun and light conditions. So 6:45 am this morning we tried again and got this shot. It's a keeper. However, right after this photograph, our hawk flew down to the river and I have a feeling she'll be out for a while. She flies around the yard every day, year 'round, and occasionally decides to go exploring on her own. Last year she came back after 2 months of eating Columbian Ground Squirrels at the end of our street, home when they estivated or disappeared underground in the extreme heat. Stay tuned.
Posted by Kate Davis at 10:03 AM No comments: 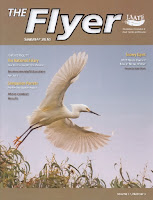 The latest Flyer from the International Association of Avian Trainers and Educators just arrived, and I thought that shot looked familiar! I'm getting some mileage out of that image. I've been working non-stop (practically) on the new book with Rob Palmer and Nick Dunlop, nearly 400 photographs so far and few guests, to be announced. This is so much fun!
Posted by Kate Davis at 4:30 PM No comments:

Even growing up in the Midwest and tornado-land, I have never seen a storm like Tuesday night! The ominous black clouds appeared over the Bitterroots to the west at dusk, bringing a wallop of a show for nearly an hour. Tom and I watched from the driveway, then retreated to the dark house as the power was out. Literally thousands of lightning bolts in every direction and winds up to 100 mph, reported from a friend's home weather station. Florence was Ground Zero, and it whirled around the Raptor Ranch, sounding like the old cliche of a jet engine. No, louder. Luckily the buildings withstood the onslaught of wind, rain and lightning, and Max the eagle was restored to his high perch by flashlight, soaking wet and looking very bedraggled. Our backyard and street didn't fare so well, and these trees were sawed out of the middle of the road at 2:30 am by the rural fire department (thanks guys!), only to spring back up into place by the weight of the root wads. Nice trick. Thanks also to Northwestern Energy for restoring our power, a quiet day with no computer and stereo. The storm was a microburst, and no more, thank-you.
Posted by Kate Davis at 8:54 AM No comments: