Here comes one of the giant fledglings with what looked like a bird, wow. Then she dropped it and I looked on the back of the camera and blew it up. A chunk of foliage. Like someone on Facebook said, "every birdie has to start somewhere." Father showed up and the begging continued until dark, with minimal Osprey sightings. Crazy light with the wildfire smoke pouring over the Bitterroots to the west. 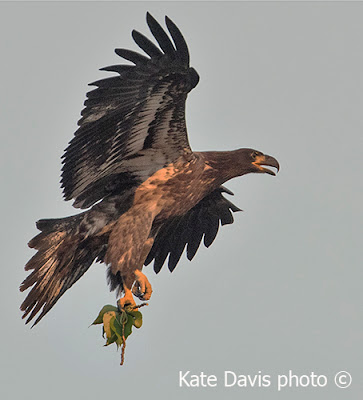 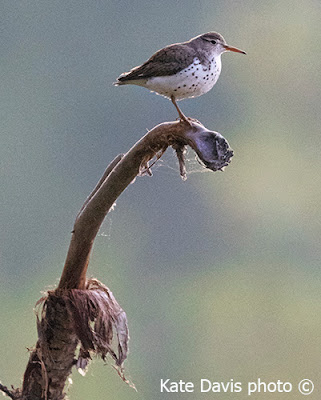 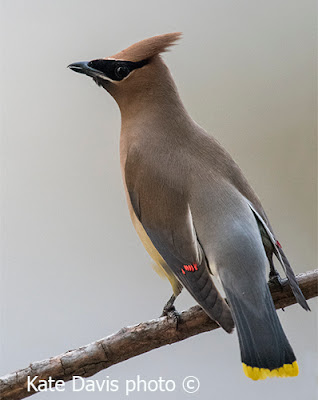 Posted by Kate Davis at 3:09 PM No comments:

Takes a week to write, minutes to read, or just look at the pretty pictures, over 50 of them this issue!
#53 and a bunch of others. 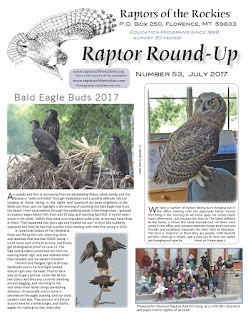 Posted by Kate Davis at 9:40 PM No comments:

The Lolo Peak fire is keeping everyone looking to the skies, and this sunset last night.
Then all three fledglings were in the nest tree, but no parents around. 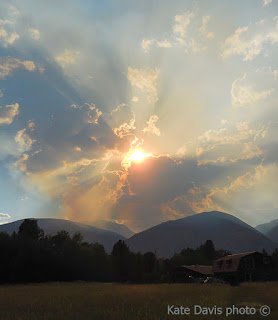 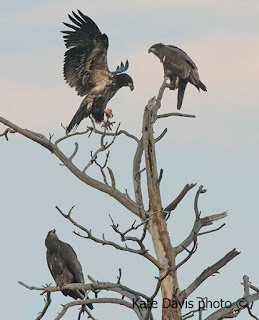 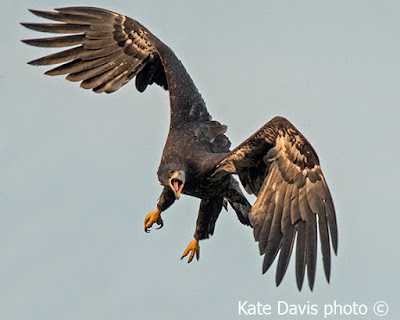 Posted by Kate Davis at 9:16 PM No comments:

This is the Lolo Peak Fire across the valley last evening at 7, and we can see three other forest fires from our house. And not even August yet... 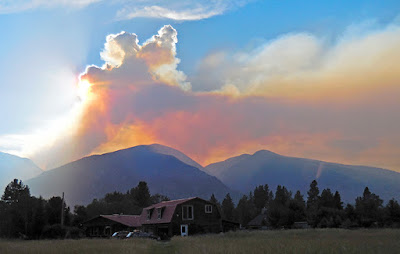 Posted by Kate Davis at 5:37 PM No comments:

I got this photo at the beach with Tom sitting next to me on a log. Very special, especially as that Osprey missed three fish downstream but scored right in front of us, just before dark, and crazy light with the Lolo Peak forest fire smoke. 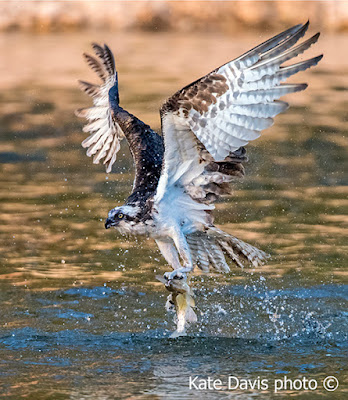 Thanks to our friend Kathy Price, I was treated to a front row view of an Osprey nest in her front yard.  I am installed in a cushy chair, photographing the birds from a room over the garage! Luxury. Three young this year and the second morning I captured one bird's first ever flight as she fledged to a near-by utility pole. Then the female posed with the remaining two. Caught it just in the nick of time, thanks Kathy. 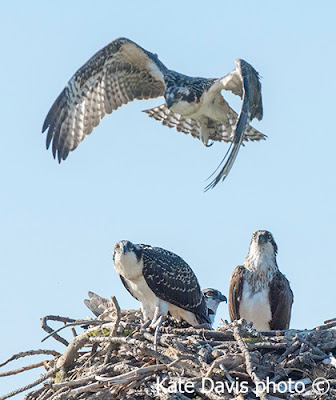 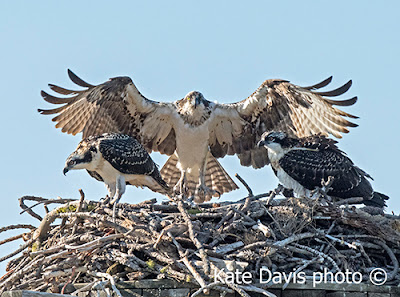 Posted by Kate Davis at 9:33 AM No comments:

Attacks On the Beach

First is the male adult attacking a poor Great Blue Heron that just happened by, way downstream.
Then something I have never seen: a perched eagle fledgling took off and chased an Osprey, who came back later for vengance! Finally some action after a few evenings of nothing. 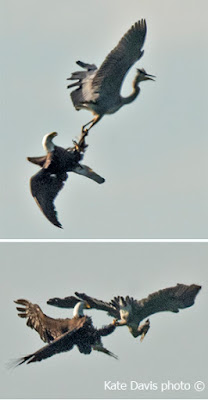 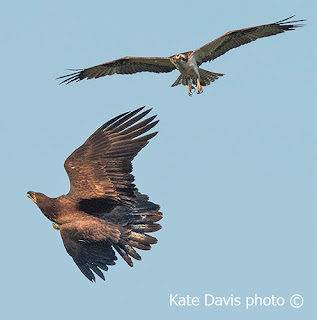 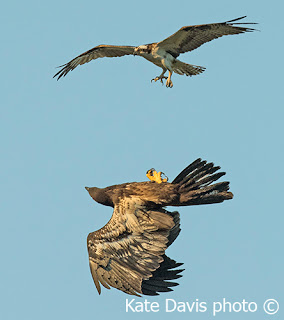 Posted by Kate Davis at 9:48 AM No comments: 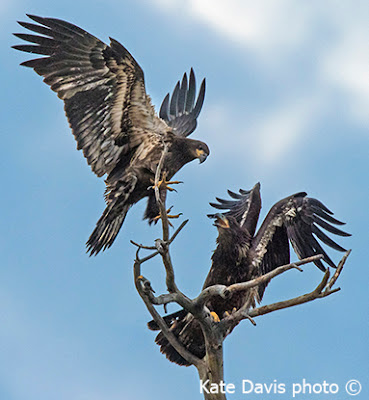 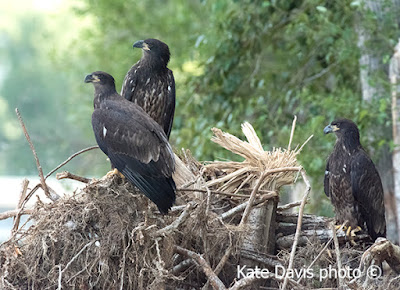 Posted by Kate Davis at 7:23 PM No comments:

A very quiet last two evenings on the beach, the eagles lingering in the shadows and for some strange reason NO Ospreys all summer! Did see some nice sandpipers and killdeer. 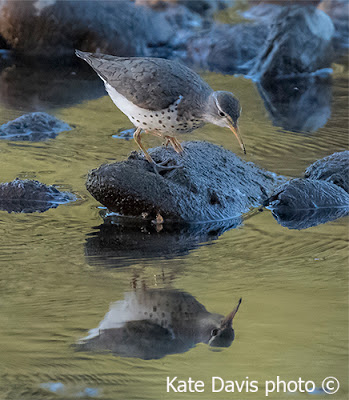 Two nights in a row I was treated to fledgling antics, two siblings together, the third below in the tree. Our favorite kestrel showed up briefly, showing them who really is the boss. Nothing last night, raptor-wise. 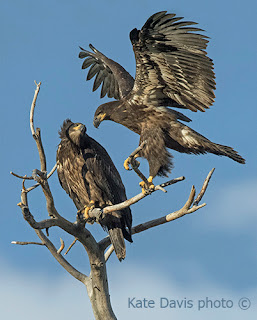 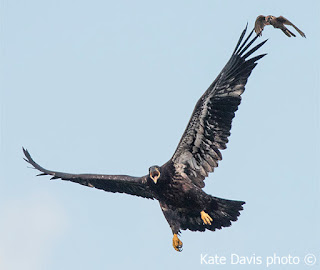 Posted by Kate Davis at 8:27 AM No comments:

A baby Great Horned Owl has joined us from the Wildlife Center of Montana in Helena. Director Lisa Rhodin knew we were hoping to acquire a second Great Horned Owl and took in this downy chick after he was confiscated by authorities. Some people in Chester, Montana were keeping him as a pet and feeding him hamburger, two big no-no's. Federal and State Permits are required to keep all native birds, with strict regulations and reports. So Simon as we named him is an imprint bird, and thinks he's "people." He has spent major time in the office, nights outside in his enclosure. Simon is now listed on our Possession Permit (thanks Linda!) and has joined the Teaching Team.


His debut was in a film for the Missoula Community Access (MCAT) kids camp, then "appearance" on Montana Public Radio (MTPR) with host Annie Garde, guests Bev Glueckert and Missoula Art Museum (MAM) kids campers. He is a natural!

Simon Caddy was a very dear friend and was tragically killed in a motorcycle accident in his home of the UK the week this owl arrived at the Raptor Ranch. We have been pals with the family, meeting his dad Adrian in 2002, a delegate for the International Wildlife Film Festival in Missoula. Simon and his brother Alex were teenagers, staying with us many times, enjoying all things American and raptor. We are in shock with his sudden passing at age 29, and profound condolences to Adrian. As a tribute we are calling the new owl Simon - smart as a Formula One race car driver, super-friendly with a wry wit, enjoying fun and games at all times, and handsome as can be, both Simons. Welcome Simon.
Posted by Kate Davis at 4:40 PM No comments: 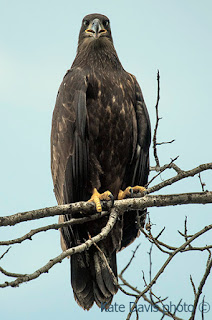 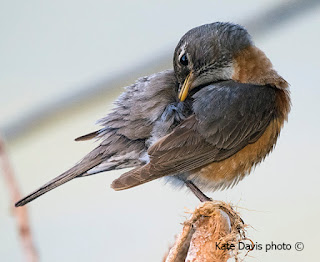 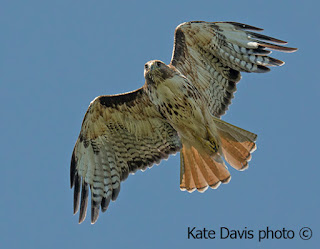 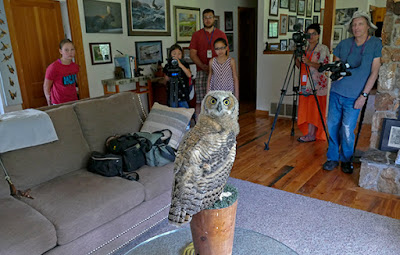 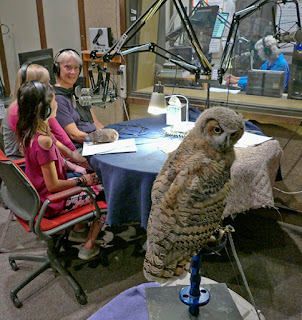 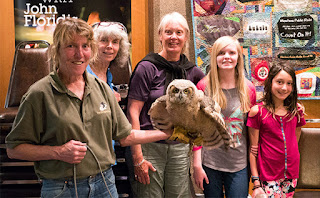 Posted by Kate Davis at 1:04 PM No comments: