After a bunch of assemblies for schools lately, we enjoyed a small gathering yesterday for the kids at Clark Fork School in Missoula. Friend Charlotte Beatty invited us to talk to the kindergarten through 2nd grade, and Sibley the Peregrine began the discussion with how she came to be an educator. I showed the little film of her time from baby in the play pen in the living room to an adult flying in a TV program chasing ducks. iPod the Pygmy-Owl was in attendance, the fairly recent addition to the teaching team and a favorite already (of course.) These children are very bird savvy, two of them arguing the merits of the Peterson versus Sibley Field Guides, no kidding. I think at that age I was discussing "Speed Racer" versus "Lost In Space." HA!
Posted by Kate Davis at 10:41 PM No comments: 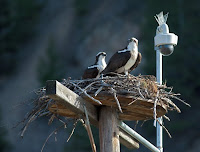 Thanks to brilliant work by many folks, the Osprey Web Cams are up LIVE:
Posted by Kate Davis at 7:41 PM No comments:

Peregrine Occupancy, What a Day

Starting in the morning, Carmen Bassin and I made the hike up to One Horse Creek, and after an hour found the two Peregrines that are holding that territory high above the valley for the second year running. We saw them flying, perching on snags on the top at the horizon, and thanks to landowner Bob Tabke for access. YES! Occupancy, and the furthest north Peregrines in the Bitterroot. We even spotted one of the Prairie Falcons that have been nesting down lower in the drainage. After that, we had no luck at Carlton Creek nearby, but in the last eight years, I never have seen a Peregrine advertising that they are nesting there. Some day. Then we saw the Ospreys at Lee Metcalf National Wildlife Refuge with the two parents on the relocated platform, and this Canada Goose incubating eggs in the background. All those little goslings will hatch nearly at once, bail of of the tree, find the water below, and disappear. Often, Ospreys will take over the nest once the geese have split the scene, so those of you with honkers at your house, take heart. You might still get some Ospreys soon!
Posted by Kate Davis at 8:40 PM No comments: 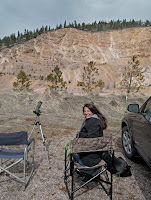 Jay Sumner, Director of the Montana Peregrine Institute has said for years, "Some day Peregrines will nest here..." and we would take a brief look at this gravel pit in Clinton. Last week he again stopped to take a peek and to his amazement, two Peregrines were cruising the cliff face, landing on the rocks and snags, and even mating before our very eyes. That's what we would call occupied. I lived right across the highway from this eyesore for 13 years, never thinking I would grow to love it as the site of a Peregrine eyrie! Carmen Bassin and I watched the pair yesterday in between snow squalls, and we are hooked. We can only guess where the birds will set up shop. They may be the offspring from one of the Blackfoot nests or the one near Drummond, and are a very welcome addition to the list of new Peregrine nests in Montana. And we owe Jay for his discovery!
Posted by Kate Davis at 8:43 AM No comments:

Riverside Ospreys Back With a Flourish 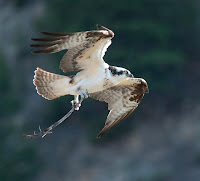 Our favorite Osprey nest is occupied again, and the male has been in the area for a few weeks. Finally the female joined him yesterday and the whole reunion has been captured on the web cam. With NorthWestern Energy, we erected an Osprey platform five years ago at Riverside Health Care. The birds have been using it the last three, and two with a camera mounted above. This year, Tammy Talley, Director at Riverside has made sure that a top-notch system was put in place, along with Heiko Langner of the University's Environmental Chemistry Lab who heads up "Project Osprey." We bought a high definition television yesterday, a deal from Vann's in Hamilton, and now we will have all of the action live for the Riverside residents, and on the web site. SOON! Here, the male is delivering a stick. Females are the ones that often have the "necklace" of darker feathers across the breast, but this male sports that plumage pattern. Plus we know it's the male, as we have witnessed several, well, matings.
Posted by Kate Davis at 11:09 AM No comments: 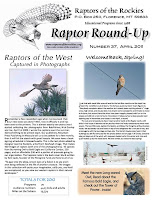 Everyone should have it in their mail boxes by Monday or Tuesday, but the three-times-a-year newsletter always looks better in color. I am making many of the new photos that appear in this issue into note cards, and my new favorite is the kestrel on the cover. My favorite story is "A Big Bald Eagle With a History" on page 3 with photos from 1986 of that eagle we rehabbed and released, right after she was trapped and fit with the radio transmitter. Check it out! Raptor Round-Up 37
Posted by Kate Davis at 8:34 AM No comments:

After a long life as an educator and inspiration to tens of thousands of children and adults, Buster the Northern Saw-whet Owl has passed of what we think could have been a heart attack; quietly eating a mouse and five minutes later dead. He joined us in 1999 as a youngster with a wing droop, and became a program favorite instantly, nearly always on his best behavior. He was also very vocal, with his whistling call lasting long hours into the night. He is already missed by the Davis's as we reflect on all of the reactions by audiences over the years, upon seeing such a "cute" little predator. He was with us for twelve happy years and a true star.