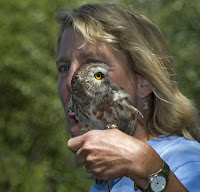 We recently met a raptor fan that has made the last two public programs, the Bannack ghost town gig near Dillon and yesterday's Community at the Confluence in Bonner. The remarkable part is that she lives in Polson on Flathead Lake, so her round trip miles are about 560, lots of road time. Pat Salmon is a true friend to the raptors, and yesterday she presented me with this photo she took at Bannack on August 1st, a winner. Buster the Northern Saw-whet Owl is also in the "leave me alone, I'm molting" stage, so has some time off. However, Sibley accompanied us for a discussion of the near-by Bonner eyrie and the 4 fledglings this year. Jillian the Great Horned Owl was on her best behavior and a portrait of Nigel the Golden Eagle even made the Missoulian newspaper. Thanks to Pat Salmon, and Judy Matson who organized the great event at the site of the former Milltown Dam, now gone and Blackfoot and Clark Fork rivers flowing free.
Posted by Kate Davis at 11:18 AM No comments:

One way to get out of educational programs is to look unpresentable for a while, a tactic used by Graham the Barred Owl every summer. She drops all of the feathers on her head in just a few weeks, facial disc, rictal bristles, the works, and looks like this. When I explained that to a women's cancer retreat at Camp Mak-A-Dream, the ladies said the same thing happened to them in chemotherapy, and many removed their wigs. This was the most embarrassing and then emotional moment in all of my 21 years of programs. Graham was a hero to the group after that and they crowded around for photos. She is has been a regular at Camp Mak-A-Dream, and we presented the very first program to campers there when they opened their doors to children and adults with cancer, back in 1995.
Posted by Kate Davis at 1:20 PM No comments:

Working around the yard today, I ran in to grab my camera 20 minutes ago when I noticed the Kootenai Creek fire right across Highway 93 exploding. "Fire season is over'" we have heard ad nauseum since the big rain storms a few weeks ago. But anything can happen in Big Sky Country, and this fire from July was the largest in the state, caused by holdover lightning. I have the pigeon loft/rehab building in this shot again to give you perspective, and stay tuned.
Posted by Kate Davis at 5:19 PM 1 comment: 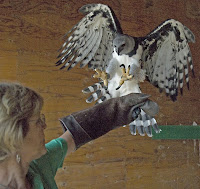 While visiting the Peregrine Fund, I finally met Raptor Specialist Trish Nixon and sat in the audience for one of her raptor programs. Here she is feeding a ten pound male Harpy Eagle, and check out those feet. I am organizing a "Raptors In Education" Symposium for next year's Raptor Research Foundation Conference to be held in Fort Collins, Colorado, September 22-26. Hosts will be the Rocky Mountain Raptor Program, leaders in rehab and education. We will have a dozen presenters that Saturday and Trish is on the top of the list, as is Glenn Stewart of the Santa Cruz Predatory Bird Research Group. Papers will include such topics as raptor care in captivity, managing an education program, and using raptors in art, creative writing, and documentary filmmaking. I assembled 15 papers for a special session for Raptor Research 2005 in Green Bay, and am now the Chair of the RRF Education Committee. Let me know if you are interested and we'll have a great collection of educators!
Posted by Kate Davis at 10:41 AM No comments:

Trip to the Peregrine Fund

I just returned from a 737 mile loop through Idaho for the big celebration at the Peregrine Fund in Boise on Thursday. They recognized the tenth anniversary of the Peregrine Falcon's de-listing from endangered status nationwide, and the de-listing now for the state of Idaho. Many friends, old and brand new joined in the revelry and swapped stories late into the night. Nick Dunlop displayed 20 of his favorite Peregrine photos in the Visitor's Center and we shared in Falcon book-signing duties, a dream come true in The Mecca. Evelyn and Bruce Haak hosted us, with plenty of his thoughtful, worldly advice on the sport of falconry. This photo was taken in the Archives of Falconry at the P Fund, and is the Merlin/Gyrfalcon (mergyr!) of Kent Carnie. We all agreed that this was the handsomest and friendliest bird we had ever encountered, coveted by me at least. He should prove to be a champion on quail, partridge and doves with his expert training. We all hope to be back for the 20th anniversary of de-listing, and heaven only knows what the falcon populations will be by then.
Posted by Kate Davis at 3:12 PM No comments:

"There's a Penguin On the Telie" 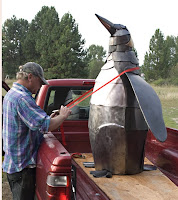 A little Monty Python humor, but this morning there was a penguin in the pickup. This latest welding project took just over a week (nearly every waking moment!) and will be living as Caras Nursery and Landscape for the next month or so at their annual sculpture show. The Red-tail and new owl pieces are also down there, with dozens of other creative works by artists from around the state.
Check out http://www.raptorsoftherockies.org/main.asp?id=art
Posted by Kate Davis at 9:50 AM No comments:

Nighthawks Are Raptors, Aren't They? 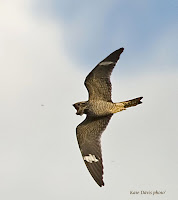 We have been treated to some fine aerial acrobatics performed by large numbers of Common Nighthawks, fattening up on insects before they head south for the winter. On two occasions, over a dozen were dipping down low in our front yard just before dark, and I got this shot of one about to catch a bug. I think they were targeting the millions of grasshoppers as they flew up higher than the grass, and that would have to be a satisfying, high calorie meal. The answer to the question is, no, nighthawks are not raptors and are in the order Caprimulgiformes. Formally called "goatsuckers" they were thought to suck the teats of farm animals at night with that huge gape. Common Nighthawks are sometimes called "Bullbats" with that erratic bat-like flight. But they're hunting tactics rival many raptors'!
Posted by Kate Davis at 9:21 AM No comments: 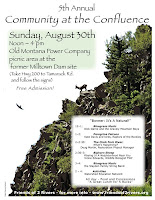 Join us for our return to the Community at the Confluence Celebration on August 30th, and this year it's at the site of the former Milltown Dam, which was removed last year. The historic area is being restored to pre-dam conditions, and Doug Martin will discuss the Superfund project. Our program is on the local Peregrine Falcon population, and the near-by nest that fledged four youngsters last month. The photo is from that cliff earlier in the spring with just a tad of PhotoShop, but a real image of the male Peregrine flying by a Bighorn Sheep. Event is sponsored by Friends of 2 Rivers -the Blackfoot and Clark Fork Rivers.
Posted by Kate Davis at 12:16 PM No comments: 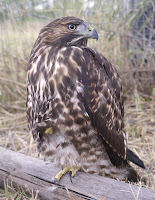 We admitted this young female Red-tailed Hawk a few weeks ago as a rehab bird, with hopes she will recover from severe head trauma. She was probably struck by a car in St. Ignatius and had to be force fed for several days. Our veterinarian Dr. Doug Bower determined that she is blind at this point, but may recover given time. She has very little pupil reaction to bright light, but at least her seizures have stopped. So we're waiting it out with fingers and toes crossed.
Posted by Kate Davis at 10:49 AM No comments:

The largest fire in the state is right across the valley at Kootenai Creek. This lightning-caused fire started three weeks ago and has survived several rain storms only to come back in force yesterday. It jumped from 900 to 2000 acres then, but is situated in a wilderness area with steep terrane so no threat to human structures, yet. Incidentally, this photo of the pigeon loft/rehab building illustrates how we released the kestrel last week - by opening a few bars of PVC pipe and letting him figure out how to release himself. We have heard the calls of a kestrel and seen one flying every day since his departure, so hopefully that's him feeding on the near-plague of grasshoppers.
Posted by Kate Davis at 5:54 PM No comments:

Tom and I took a drive over to the Big Hole Valley yesterday for another bird program at my favorite ghost town, Bannack State Park. Named as the first Territorial Capital in Montana back in 1864, this gold rush town on Grasshopper Creek boasts over 60 structures, most of which you can explore. Assistant Managers Tom and Cherie Lowe live there year 'round in a 100+ year old house, and found the best place for their internet dish was on top of the outhouse (they do have plumbing inside.) The program was a blast with the biggest crowd ever for a Saturday Campground Talk. Evita the Swainson's Hawk was exceptionally well behaved, and this area was her stompin' grounds before she broke her wing bouncing off a car. Check out Bannack and the Big Hole, a paradise to visit any time of the year.
Posted by Kate Davis at 3:34 PM No comments: