Birds And Art For Our Bitterrooters

Yesterday we joined 30 youngsters for an afternoon program of Birds And Art at nearby Lone Rock Elementary School. Sibley the Peregrine showed off her flight feathers, then with Miles the Great Horned on a glove on my left hand, I went through the steps of drawing an owl on the board. They all joined in and took home some precious artwork. Here a student proves that he is not afraid of color, and even put a hat on his subject!
Posted by Kate Davis at 8:21 AM No comments:

Jay gets a close-up of Sibley the Peregrine on a duck today. With stealth and a Canon camera, he captured the action as Sib plucked the mallard drake.
Posted by Kate Davis at 4:49 PM No comments: 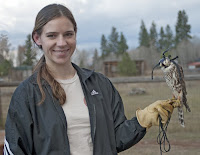 When Allyson Cowan was 11 years old, she accompanied her Mom to a Raptors program at the Rocky Mountain Elk Foundation, where Julie worked on Bugle Magazine. Allyson decided right then and there that she would study birds and certainly one day be a falconer. Her senior project in high school was on the sport, and as an apprentice she trained a Kestrel (several photos in the Falcon book,) a Red-tailed Hawk, plus used our Prairie Falcon in her final presentation to the school. Today Allie got her first bird as a General Falconer, a female Richardson's Merlin, and high hopes for the hunting season. We made up the word, but it seems really appropriate and it is what she uses as her email address - The Falconesse.
Posted by Kate Davis at 6:23 PM No comments:

For at least ten years, we have presented to the Missoula Chamber of Commerce group, Leadership Missoula, folks bettering their skills in workshops ranging from business management to awareness of natural sciences. Today we celebrated our 1200th educational program since we started in 1988, and what better audience than these long-term partners. With the venue of the Rocky Mountain Elk Foundation in Missoula, we filled the closing hour from 4 to 5 p.m., with sponsors bringing in treats for attendees to enjoy at the end. I was delighted to find that appetizers were provided by "Hooters," and their gals posed here with Jillian the Great Horned Owl. A few Leadership folks timidly admitted that they didn't at first understand why I thought that was a great idea, but then saw the reasoning. Cracks me up.
Posted by Kate Davis at 10:17 PM 2 comments:

If You Don't Like the Weather, Wait a Week 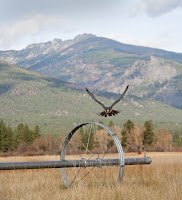 We've had a 65 degree change in the temperature in one week, with record-breaking lows last week, 14 degrees lower than ever before in the state. Monday was the coldest with 5 degrees at our house and 70 yesterday. That's Fahrenheit. We winterized the Harris's Hawk buildings with heated perches and 100 watt red light bulbs, but unplugged everything mid-week with the balmy temps. Today, Sib had a big flight in the Bitterroot, heading over here from an irrigation wheel to continue hunting for nearly and hour and half total. I now why they say "lucky duck."
Posted by Kate Davis at 4:58 PM No comments:

Our Last Program With The Bug Man

We just fished an hour with the Florence first and second grade, and our favorite teacher on earth, Byron Weber. Since we moved to the Bitterroot in 2001, our birds have made the quick trip across the road for a visit to the elementary school, and this will be the last with Byron. He is retiring after a lifetime of teaching, from high school to first grade and even preschool. His love and knowledge of the natural world and his passion for journaling have been absorbed by thousands of students. Appearing once a month on Montana Public Radio, he discusses his number one interest, entomology, with host Annie Garde. Asked him today if any "bugs" ever got loose on the show, and he said maybe once or twice!
Posted by Kate Davis at 12:27 PM No comments: 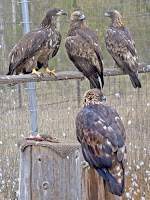 Yesterday the rehab Bald Eagle joined the three Golden Eagle boys in the 40 foot enclosure for a test of her skills. We wanted to see how well her balance and flight abilities would be after her slight injuries and so far, so good. She immediately jumped up on the big horizontal perch and stood tall surveying the river. Max, our 20 year old Golden Eagle was a bit put out (below), but he'll get over it. Rescuer Shane reported that the place he picked her up on the railroad tracks was impossible to reach by car. Instead we plan a release at Lee Metcalf National Wildlife Refuge on Friday. Join us if you would like, and I can fill you in on the details.
UPDATE 10/16: Released and flew away just fine!
Posted by Kate Davis at 5:55 PM No comments:

Heroics on the Railroad Tracks

Fast thinking and ingenuity saved this Bald Eagle, found on the railroad tracks near Nine Mile by Shane Baertsch. Shane has worked in maintenance on the track department for Rail Link for 15 years, and admits he couldn't pass this bird by yesterday, standing to the side and unable to fly. Shane caught her fairly easily then had to come up with a way to restrain her until his shift was over and he could get her to a rehabber. Despite the frigid weather, off came his thermal undershirt and he fed the neck and head through one sleeve. The eagle body inside, he then wrapped legs and dangerous feet with the other sleeve, secured with "the handyman's secret weapon," duct tape. Here his is at delivery with the rehab building in the background and inside after a big meal this morning. This is a hatch year female, slight concussion and wing droop, and should be back in the wild in no time; and I must say, the most clever thinking of anyone to deal with a big predator!
Posted by Kate Davis at 11:24 AM No comments:

Elk In the Foreground 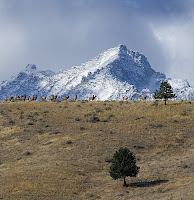 Jay Sumner and I spent the day on another hunt with our Peregrines, and this time I got a photo of a herd of elk with the backdrop of the Bitterroot Mountains south of here. A great time with new friends and big storms predicted for tonight so don't know when we'll get back and have such fun. Huge winds and snows, but we love this time of year!
Posted by Kate Davis at 7:46 PM No comments:

Action in the Distance 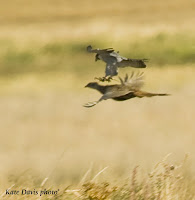 Another photo from our pheasant hunt at the Rocky Mountain Front, and here is the tiercel about to hit a hen after a 300-400 foot stoop. It's hard for me to judge height with the smaller male Peregrine which I'm not used to seeing. Anyway, he smacked this bird with a loud whack, and she disappeared in the brush. Up went the falcon again and he caught another hen that he rode to the ground. When we got back to the truck, we discovered that one of the transmitters attached for radio telemetry was missing. We always install two tracking devices on the anklets of our birds in case they decide to fly off. With receivers in hand we traced the beeps back to this spot. About to give up, Jay finally found the tiny black (!) transmitter with antenna in a bush, the cable tie to the falcon's anklet broken in the impact with the pheasant. Skip immediately put some bright orange tape on the transmitter, so we can find it easier next time this happens.
Posted by Kate Davis at 7:53 AM No comments:

Boy, Did I Blow It

Our great friends Jeremy and Gretchen Puckett and their 5-year-old daughter, Lydia just visited for a few days and we had a ball. The couple were my photography mentors twelve years ago and moved to Paonia, Colorado where Gretchen works for High Country News. The four of us went out to "shoot" some birds at nearby Lee Metcalf National Wildlife Refuge where we talked Nikon cameras and told stories. After a half hour of duck-watching, this bird flew in and landed in the cattails. It was an American Bittern, the first one I have ever seen at the refuge, and where were our cameras? In the car! When it flew again I messed up those shots, then followed the bird, running down the road heading west. Just as I spotted the signature camouflage of Bittern in the weeds, it flew directly across twenty yards away. Up went the camera and what's this? I had replaced the lens cap before the run and blew the shot of a lifetime and instead got this lousy one, flying away. We told more stories on the way back, including how the day before, Jeremy and Gretchen missed an otter family photo, also twenty yards away, because they had their camera on timer mode. It happens to everyone, I guess.
Posted by Kate Davis at 1:32 PM No comments:

So What Is Happening Here?

Jay Sumner and I just spent two days hunting with our Peregrines and our pal Skip Tubbs in Choteau, and I grabbed this shot in the afternoon. Skip was bringing his tiercel (male) back to the truck after the bird had clobbered a Ring-necked Pheasant. Skip was thrilled to see his English Setter, Dizzy, holding a point in the grass, and when we got close he flushed the hen. This pheasant was the luckiest of the batch, to fly off after the falcons had scored their game, and a beautiful sight.
Posted by Kate Davis at 11:12 PM No comments: