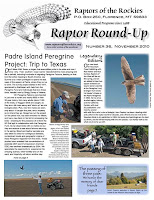 I had hoped to have this printed and in the mail this week, but the big blizzard kept us at home, tending to birds all over the house. So check your mail next Tuesday or Wednesday for a copy for the coffee table. Better yet, see it here in color.
In This Issue: Padre Island Peregrine Project, new book update, Zortman Program, Raptor Research Foundation Symposium, Rough-legged Hawks, a farewell to dear friends, and much much more...
http://www.raptorsoftherockies.org/main.asp?id=newsletter
(Hey, we just plugged this last blog!)
Posted by Kate Davis at 1:11 PM No comments:

We thought it to be an idle threat, but yesterday's arctic blast/snow/wind was right on time. We currently have the Pygmy and Saw-whet Owls, Kestrel, Peregrine and Chesty the Harris's Hawk inside the house. That's along with two dogs, two cats, and us, a menagerie until it warms up. And another memorable event, Jay's Peregrine took off from the sloughs of West Mullan Road near Missoula the day before and spent the night out near my house of all places, 25 miles distant. First thing in the morning we were calling her down out of a tree and heard a man driving his kids to school shout, "Hey Kate! What are you doing?" Remember that Raptor Round-Up Newsletter from a few years ago where the little girl dressed as Kate Davis for Halloween? Jay's bird was in their yard! What are the chances? I remember that her brother went as Jacque Cousteau so an out-doorsey family. We had a tiny show-and-tell with the falcon, and the kids told their dad that it was a okay to be late to school, just this one time.
It's Newsletter # 26, page 6: http://www.raptorsoftherockies.org/main.asp?id=newsletter
Posted by Kate Davis at 9:47 AM No comments:

Thousands Descend Upon the Bitterroot

On Wednesday night when I was out feeding the owls, I heard a huge flock of geese flying overhead in the dark, heading south. The sound seemed to go on and on and I finally went back inside. My friend Tad Lubinski also heard the ruckus, and was ready with his camera the next morning. It turns out that an estimated 8000 Snow Geese descended upon Lee Metcalf National Wildlife Refuge in Stevensville, pushed into migration just ahead of the arctic cold front. What a scene, but it didn't last as the bulk of them pushed on that day. Winter has officially arrived, with snow, wind and dropping temperatures today. Our hawks are hunkerin' down, mice heated by the wood stove.
See Tad's web site: http://www.btlubinski.com/
Posted by Kate Davis at 12:58 PM No comments:

If you aren't already keyed in, tomorrow is the big football game rivalry of the season, U of M Grizzlies versus the MSU Bobcats of Bozeman. The kids at Saint Joseph's School in Missoula sure were, as we held an assembly for the students, rarin' to go in their Griz regalia. The 200-plus students had four of our raptors visit the school, and when asked, "What do raptors eat?" the resounding answer was "MEAT," to which I responded, "Yes, BOBCATS!" Remind me to never say that again, with a tumultuous response in the bleachers that went on and on... Our friend Rick Paris took this photo of the kids meeting Jillian the Great Horned Owl, a bird that was actually recovered by a teacher at St. Joe's five years earlier on Highway 93 in the Bitterroot after being hit by a car! What a coincidence and a happy reunion all these years later.
Posted by Kate Davis at 6:47 PM No comments:

On a quick overnight trip up north and program for Flathead Audubon in Kalispell, we were greeted along the way by myriads of Rough-legged Hawks. Migrating down from their arctic breeding territories, they seek wintering ground that reminds them of home: open-country grasslands and marshes. Years ago, Rough-legs near Ronan were found to share "communal roosts" with up to 250 individuals sleeping in one area. Research suggests that these serve as "information centers" allowing hawks to find food locally by following successful hunters. They often perch on these tiny limbs and twigs, impossible-looking perches for such big birds and a way to tell them from Red-tails, who prefer a more substantial substrate.
Posted by Kate Davis at 3:31 PM No comments:

Thanks for the opportunity to speak to our new friends in Dillon, a program at the college for 75 cadets at the Challenge Academy. Jay and I tag-teamed with PowerPoints and Peregrines, discussing their biology, recovery and falconry. We stayed with Jack and Brenda Kirkley and hunted in the area, even getting lost on the way home and a white-knuckle drive on ice, high in the mountains over the Big Hole Valley. That will teach Jay to leave me in charge of reading the map!
Posted by Kate Davis at 5:54 PM No comments:

Jay Sumner and I were dressed as falconers yesterday for Halloween, and here Marlis the Peregrine is trying to spot a duck that she had stooped upon. It disappeared underwater in the slough, hiding in a ancient root wad up against the bank and breathing a sigh of relief. Sibley and Marlis flew a total of four hours, getting high on thermals and chasing game, but only one duck for dinner tonight. I remember John Craighead telling me ten years back, "If we relied on this sport to feed our families, we would have starved long ago."
Posted by Kate Davis at 10:44 AM No comments: