Harrier Over the Sagebrush 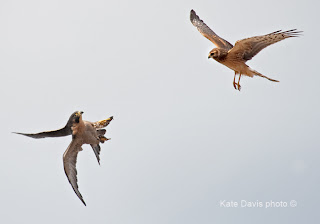 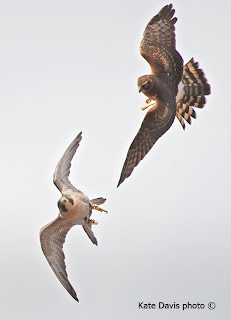 Sibley had some fun with a few Northern Harriers today, flying over the sagebrush hillside across the river. Three hawks, a Short-eared Owl and the only Hungarian Partridge were in my friend James's driveway on the way home!
Posted by Kate Davis at 12:58 PM No comments:

Farewell to the Fish Hawk 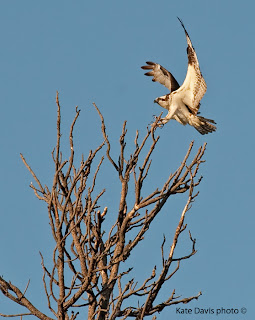 A constant sight around here since April, all of the Ospreys will be gone very soon, and just got this shot at the river. Perhaps it's a northern bird just passing through on his way to the southern hemisphere, or maybe a resident bird lingering. The two fledglings could be seen for weeks in high soars with their parents, or in chase after a fish dangling from dad's talons. Adult birds leave sooner and head to the tropics, often flying over open water and feeding along the way. The young finally depart, even though the fishing is still fine around here, as they have a long migration ahead. A tough life, with the strict live fish diet and flying time to wintering grounds, so most Ospreys die that first year, perhaps as much as 70 %. Maybe their only little break, the young birds stay in the tropics for their first year and only come back when they are two years of age. Where do "our" birds go exactly? We'll know soon enough as Rob Domenech and Raptor View Research Institute have fit several adults and young with satellite transmitters, and we'll keep you posted. In the meantime, say goodbye to the birds biologist Alan Poole says leave the frigid north, "to pursue an endless summer."
Posted by Kate Davis at 9:46 AM No comments: 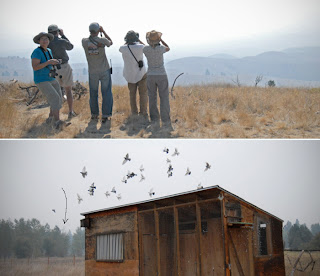 This is getting really old, the last month of smoke so thick we can't see the mountains, or even across the river. It began pouring into the Bitterroot Valley from a huge fire in Idaho, one that has since spread to Montana, and the Sawtooth fire west of Hamilton that has caused hundreds of evacuations. Air quality = very unhealthy. The top photo is hawkwatching at MPG Ranch with Steve Hoffman, and birds drifting through the smoke. Remarkably we saw 4 Broad-winged Hawks, and they spotted 9 the day before, 19 this season and unusual indeed. The pigeons don't seem to mind the smoke, but a few days I opted not to put Sibley the Peregrine up in the stuff. The arrow shows the Bald Eagle nest across the river, barely visible. No end in sight, with precip expected on a distant horizon and not in the near future.
Posted by Kate Davis at 9:08 AM No comments: 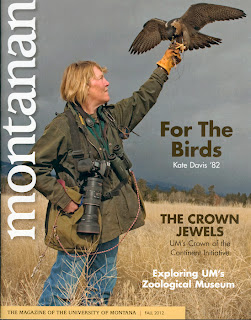 ...98,000 copies! This is sent to all University of Montana alumni, donors and staff, and has the largest circulation of any magazine in the state. Editor John Heaney called this spring to see if I was interested, as he had seen our book and earlier story about the Chickadee Symphony (Oct 14, 2011 blog.) He wanted to have long-time pal, writer Ginny Merriam do the profile, and then they decided we had the cover! Photo by my buddy Keith Fialcowitz (plus another one in the story,) taken at the MPG Ranch last winter. They included some of my photos and those of Todd Goodrich, in the classroom and at the Raptor Ranch. Click to read. http://www2.umt.edu/montanan/f12/contents.asp
Posted by Kate Davis at 3:23 PM No comments: 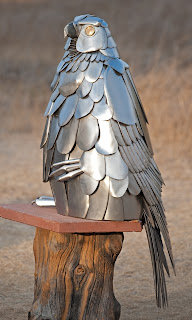 What a marathon over the last week, and I just finished the 5 foot Gyrfalcon, whew- 18 gauge steel and brass eyes, started first of July, "And done in two or three weeks," I assured Tom who had to move the raft out of the garage.  One single piece took two hours yesterday- guess which one.  Thanks to Hans Peeters for the technical advice, emails back and forth and sketch to go by, where he defined the upper breast (with feathers that make "boobs" with a "cleavage" and he's right on!) I just found out it will accompany my photographs for a show at the Holter Museum in Helena in January, wee doggies! This is sponsored by Tthe Nature Conservancy and also features the work of (drumroll please) Ansel Adams!
Posted by Kate Davis at 12:48 PM No comments:

Back from The Front 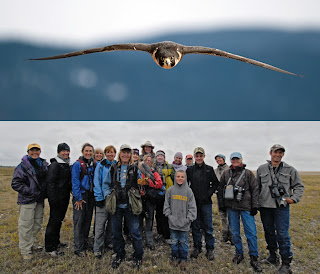 We made the trek back to the Rocky Mountain Front and had a few days of fun with The Nature Conservancy's Women's Week at Pine Butte Guest Ranch. Sib, Alisa, Jillian and Owen the Owl were stars for the program just before social hour, a PowerPoint the next morning, then hunt with the falcon. That was a bit nerve-wracking in planning, but came off without a hitch as the women marched through the wide open country in search of game birds. To my surprise, we scared up a huge white-tailed jackrabbit that Sibley stooped on repeatedly, just in play I imagine, but I think our audience was split down the middle, half rooting for the rabbit. Thanks to the ladies for your generosity, and Jeff, Nikki and Kat for a trip I'll never forget. Tonight a program at the University for the Montana Chapter of the American College of Physicians, then back to welding, whew!
Posted by Kate Davis at 9:12 AM No comments: 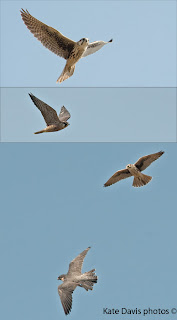 Todays flight at the MPG Ranch across the river brought in a Prairie Falcon in play (top) and young male Peregrine on the hunt (middle.) Sibley was up a few hundred feet, following along when the Prairie showed up and they circled together for about 5 minutes (bottom photo.) Then I heard kacking and looked to see Sib in a scrap with a wild Peregrine so I called her into the lure. Safe and sound, the wild falcon stooped on sparrows that the dogs were scaring up in the grass, then must have seen something better at the river and he was gone. Notice the molt on Sib, man o man.
Posted by Kate Davis at 1:28 PM No comments: 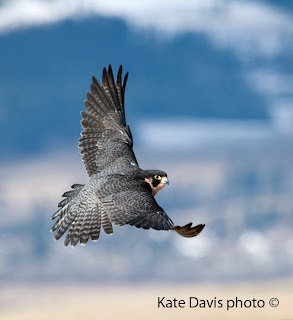 Just back from Sibley the Peregrine's first flight of the season, falconry season that is, and her tenth year in the air. Not too impressive...yet, but we have seven months of fun ahead. She is still overweight (aren't we all?) but not overly so like in past years. So, as her molt finishes up we drop her rations a bit and exercise nearly every day. The dogs are as excited as we are, and ran in circles when they saw the vest and telemetry and perch in the back of the car. Wait 'till you see the big press ahead, and here's a sneak peek - Montanan Magazine.