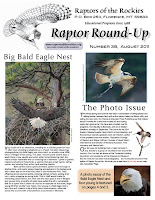 Raptor Round-Up Newsletters were mailed out Tuesday, and check it out in color on our web site, raptorsoftherockies.org. I call it the Photo Issue, with over 50 images, mostly our big Bald Eagle nest and favorite Ospreys on the Clark Fork. It's been a busy four months with the trusty Nikon D700, and now a new (used) 500 mm lens. Can hardly wait for next years breeding season and see what we can find!
Posted by Kate Davis at 8:33 AM No comments:

Three back at the nest Monday! Looks like the last photo with all four Bald Eagle young was on June 25th, and after that, one has stayed elusive. The most frustrating experience of my photographic life has been capturing all four at once. One would always duck down as the fourth stood up. Always. Or one was looking the other way. I must admit that out of irritation I might have shouted, "Hey, look over here!" which never worked. They have locomotives and a highway speeding by, so a puny human standing 100 yards away is nothing.

Posted by Kate Davis at 9:53 AM No comments:

Today's visit was number 40-something to our favorite nest on the Clark Fork River, and three Bald Eagle fledglings were at the nest, begging away. One was laying down and our friend Carmen Bassin pointed out that it really is the only place they can do that, good point. Return to the sticks to "pop a squat." In the mean time they might be hunting on their own, but kind of doubtful, as both parents keep returning with all they need. We did observe one youngster crash to the ground to retrieve a pinecone, which was treasured and plucked. Not off the hook yet, photographing these birds, a month and a half after they fledged and still a joy to see them all.
Posted by Kate Davis at 7:44 PM No comments:

For those of you still watching the Riverside Osprey web cam, a lucky hit would be to see the family return to the nest, since the baby fledged on August 7th. I lucked out five days later when driving by the spot and saw an adult plunge to the river so pulled into the parking lot by the nest to grab this shot. This is the youngster hoping for a free meal, and the female also returned, looking up and down river, after which she split. Young Ospreys can hunt on their own after leaving the nest but must figure out that crazy light refraction of observing a fish under the water and scoring a meal. Parents will be heading back to Central or South America in the next month, with youngsters soon to follow. The babies remain in that "wintering ground" until they are old enough to breed for perhaps three years, which is atypical for any migrant, the only raptors to do this that I can think of (aside from one Hawk-eagle) and another reason to love the Ospreys!
Posted by Kate Davis at 7:38 PM No comments:

Jay Sumner climbed down this cliff in 1961 and collected his first Peregrine Falcon fifty years ago, before all of you kids were born, and today we re-lived the experience over breakfast. Formally called the "Tasty Freeze Eyrie," Jay and John Craighead and daughter Karen hitched a rope over a tree at the top, and Jay got his first falcon for the sport that would dominate his life. Falconry is hunting wild game with a captive bird, and in this case a baby that was flown for many years. On Saturday we met with fellow falconers at our annual state picnic in Livingston, then Jay showed me a bunch of cliffs that he had been checking nearby since a teenager. We brought our binoculars into the restaurant, and were treated to the pair of Peregrines flying across the cliff, chasing swifts while we were eating breakfast. The waitress was un-astounded, but that's fine because we both were!
Posted by Kate Davis at 7:34 PM No comments: 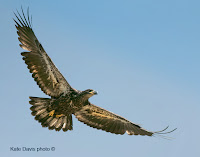 Carmen Bassin and I made the trek to Bannack State Park near Dillon on Saturday for a program with iPod, Alisa and Nigel, all heroes. We were told that it was the biggest crowd they had ever had for their Saturday speakers and we sold a box of books, yippee. Then Sunday we were joined by KUFM public radio aficionados Annie and Larry Garde for a day in the field. Starting at Riverside Health Care we spotted the just-fledged Osprey across the river on a cliff, mother near-by. Then off to the Bald Eagle nest and a treat with both adults and all four young, begging and begging. Three fledglings returned to the nest, and the male delivered a small fish that must have been swallowed in one gulp. Join us this Thursday on the Pea Green Boat MT Public Radio 4 to 5 pm and we'll talk about the nest, and other goings-on.
Posted by Kate Davis at 10:45 AM No comments:

Yesterday Jay and were treated to some hunting forays by the Peregrines at McQuarry, otherwise known as the Clinton gravel pit. Looks like they fledged at least one young, a female that joined her father in a stoop on a swallow. Then he returned to the rocks and some shade, when the adult female appeared. She caught two swallows in ten minutes, and all in the heat of the day at 3 pm. I would never think this spot would be parked in front of this eyesore with a scope, but Jay always said, "Some day..." Maybe a mayor tourist destination for ecotours, headquarters at Poor Henry's Bar? Probably not.
Posted by Kate Davis at 8:39 AM No comments: 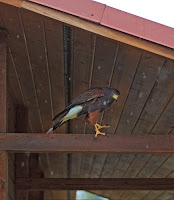 Chesty the 21 year-old Harris's Hawk was smart enough to come in out of the rain during her daily flight around the Raptor Ranch today. Obviously the photographer was not so clever. Chest was hanging out in the eves of the back porch, ironic as it is a common spot for humans to take refuge when she's flying around the yard! So far four years plus, every day, an enriching cruise.
Posted by Kate Davis at 11:05 AM No comments:

What has happened to this summer? July has come and gone, and August arrived with a rain and wind storm. Seems like everything is about a month off. This is yesterday's photo of one of the fledgling Bald Eagles chasing a parent and begging which makes three months of photographing the family. Two youngsters were in hot pursuit over the river, across the train tracks and highway, to disappear somewhere over by Mount Jumbo. I'll bet they haven't hunted on their own yet and wait until the parents just SNAP and say, "Get a job!"
Posted by Kate Davis at 9:07 PM No comments: