With Jay Sumner and Sharon Fuller, I spent an afternoon in the field checking rock cliffs on the Blackfoot River for Peregrine Falcon occupancy for the Montana Peregrine Institute. We were treated to three birds at one nesting cliff, the second male perhaps from another nearby (and as-of-yet unknown) nest. Some other cliffs looked like prime nesting locations, but no falcons yet. And at the last spot we observed and filmed the Peregrines mating, sure sign of occupancy, and looks like they are planning to use a site from three years ago. The female is very large and has a different coloration than the one here last year. At both of these nests, the parent birds fed on salmonflies, catching them in the air over the river. Jay and I wrote a paper on this behavior that was published in the journal, Western Birds.
Posted by Kate Davis at 7:24 AM No comments:

Crazy spring weather around the country, and a winter storm dumped snow across Western Montana. This Western Bluebird waited it out atop the metal Osprey sculpture in the yard. Chesty and Deja the Harris's Hawks still did their laps flying in the yard, looking a little out of place being a desert species. And it did make for the best skiing in memory!
Posted by Kate Davis at 8:23 AM No comments: 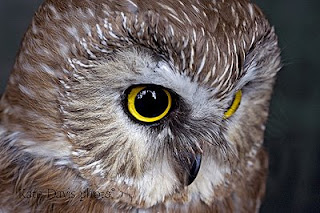 Our falconry season is over, and Sibley now has until mid-August to eat her fill of Coturnix Quail and molt all new feathers. The two Harris's Hawks will continue to fly every day, but just around the property. So a big adjustment after taking the falcon out every day for 7 months, and time to spare. As soon as the snow (!) lets up it will be time for the big spring enclosure clean. Buster the Northern Saw-whet Owl (above) is serenading us every night with his monotonous calls, a toot-toot-toot, over and over and over again...
Posted by Kate Davis at 8:44 AM No comments:

Raptors of the Rockies joins the 21st century with a few new developments, courtesy our innovative web master, Steve Palmer. Our web site officially went global on Superbowl Sunday 1999, and has undergone a few "facelifts." As of yesterday we made another big stride and posted a few short videos on YouTube, Sibley and Chesty. Now today, a blog! I would like to share a little bit about our program and birds each day, including a photo, and am excited about reaching even more fellow raptor fans.