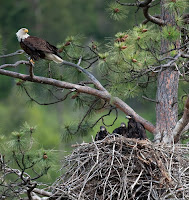 Yesterday was killer at the eagle nest, with a rented Nikon 500 mm lens from BorrowLenses.com in San Carlos, California. Man O man, would I love to buy one of these, but for the time being, only on loan. It would cost more than my first three cars, and those of you that remember the olden days can recall that white '72 Volkswagen bug, '82 Datsun station wagon with the pack rats living in the headliner, and Subaru number 1. We'll be back at the nest for the next five days with the rental lens and hopefully better weather than today. Snow squalls in May?
Posted by Kate Davis at 10:34 PM No comments: 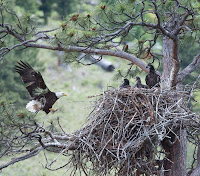 These nestlings are awaiting the delivery of yet another Canada Goose gosling, and just parts. Last week we identified by careful zooms on these photos that they enjoyed several Columbian Ground Squirrels and at least one Eastern Fox Squirrel, amazing. Theft from other raptors as they are so prone, or hunting mammals for themselves? Beats me, and stay tuned. Four babies in this nest, and one was hiding in this shot.
Posted by Kate Davis at 7:39 PM No comments:

Just back from the Asia-Pacific Economic Cooperation Conference at Big Sky near Yellowstone Park, and a photo of the Subaru at dawn with Nigel the eagle and Jillian the owl in the back. We had a great visit, with hundreds of photos of the 175 attendees from 21 countries with our ambassador bird mostly taken from little cameras as big as a pack of playing cards. Our emcee and I have a few friends in common in the raptor world, as he was involved in reintroduction of Bald Eagles in California, and one man was convinced he had seen me on The Tonight Show with Jay Lenno. You bet, that was me, wearing a dress. Ha!
Posted by Kate Davis at 4:24 PM No comments: 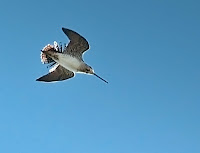 I pointed out a flying Wilson's Snipe (earlier I said Common, but those are the European variety, I just found) to some visitors this week, and they were surprised to learn that there really is such a thing. Apparently one of our friends was tricked into "snipe hunts" as a kid, pointless ventures into the night with a sack, a practical joke played on all kids. This was a male snipe performing an elaborate flight display marking his territory, flying high and plunging toward the ground. Special muscles fan out his tail feathers which vibrate and make a beautiful winnowing sound. Instead of the typical 12 tail feathers of other birds including sandpipers, snipe have 14 or 16 depending on subspecies. They must have a nest in the grass near the house, and this guy displays well past dark.
Posted by Kate Davis at 8:25 AM No comments:

These Bald Eagles are confounding us with food for the nestlings. What does that look like? Yep, a duck head. These kids had an entirely avian diet in the three hours that Carmen Bassin and I spent at the nest today, Mother's Day for the youngsters with feathers again flying. The last delivery was another Canada Goose gosling, and the nearby golf course must salute the heroics of the eagles for picking off a problem bird on the links. Or maybe not...
Posted by Kate Davis at 7:46 PM No comments:

What Is He/She Bringing in Now?

Another morning at our local Bald Eagle nest and a surprise prey delivery. We think of these birds as fish specialists this time of year, but a pigeon! Feathers were flying and a quick drop off for one nestling in particular, then the adult made a bee-line up river to return a half hour later with a - get this - Canada Goose gosling. So an avian diet today and beats me how they caught a pigeon. Even our Peregrine can't catch the ones we have to train her in the fall.
Posted by Kate Davis at 9:23 PM No comments:

Just back from a program at Woodman School, up Lolo Creek, Highway 12 a bit, and what fun. These kids are so into the out-of-doors with 4-H projects and bluebird boxes everywhere. Maybe that wasn't a good idea to install a Kestrel nesting box right there, oh well. A good friend of ours attended that school a while back and told us, "When I was in the first grade there was no eighth grade and when I was in the second grade there was no first grade. All eight grades in one room. And at recess all eight grades played together so you could have two baseball teams." This school was built in 1892, so the joke is that maybe my friend and I could have been there when Lewis and Clark passed through. It's on the Historic Trail!

Posted by Kate Davis at 9:14 PM No comments: 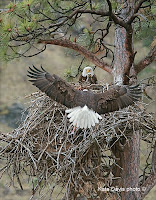 This is definitely my favorite lately, the male Bald Eagle bring in a fish to a nest on the Clark Fork River, the youngster and mom ready to chow down. Thanks to photographer and friend John Salisbury for helping me get the colors right on this one! It will be featured in a show called BirdFest 2011 at the Artists' Shop on Higgins, downtown Missoula for next month. Bird art in many mediums by a myriad of talents will be featured. Several photos from our new book "Raptors of the West" are included and even a book signing for First Friday in June.
Posted by Kate Davis at 5:17 PM 1 comment: