Our second afternoon of Birds And Art at the Missoula Art Museum was even more fun than last week, and our birds-on-their-best-behaviors were Buster the Saw-whet Owl and Miles the Golden Eagle. Sibley also joined us, hamming it up as usual. This time, half of our artists made wire raptor sculptures with instructor Bev Glueckert giving them a hand. Our pal Marirose Kuhlman shows off her rendering of a special Peregrine Falcon. Our ump-teenth kid's workshop is slated for mid-June. We will definitely hold this class again as it was a big success, and especially fun for me. We may say it's a Grown-Up Program, rather than Adult Program, for subtle reasons that were briefly discussed.
Posted by Kate Davis at 2:47 PM 1 comment: 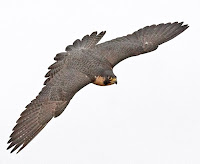 At the Peregrine Falcon Working Group meeting in Helena this week, plans for a new monitoring strategy were revealed. The U.S. Fish and Wildlife Service surveys are every three years, one in 2009, so Montana Peregrine Institute Director Jay Sumner has come up with a plan for the next two years. He has assigned, ok suggested, that agency biologists and Peregrine enthusiasts watch one or more nests this breeding season as their own project, recording occupancy and hopefully even productivity. With 84 active eyries last year and 115 total in recent years, no small task. Work begins in April, watching a cliff for at least four hours to determine occupancy = 2 adult Peregrines. Then the fun begins trying to find the nest ledge, if you are so inclined. Discover a brand new territory and Jay promises you will be rewarded handsomely. Interested in Peregrine Watch 2010? Let us know.
Posted by Kate Davis at 8:39 AM No comments:

Birds And Art at the MAM for Grown-Ups 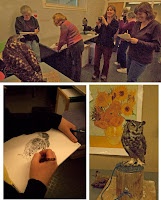 What fun! A Saturday afternoon at the Missoula Art Museum with 20 folks learning about avian structure and function for sketching sessions with our birds. This was the debut public appearance for Alisa the new Red-tail (top) and she was the perfect model, a few wing flaps but otherwise very relaxed and turning her head in all positions as she listened. At the front table was Sibley, the old pro, and a wonderful rendering of her lower left. Miles the Great Horned Owl rounded out the program, on his best behavior ever. MAM advertised this program at the first of the year and a deluge of sign-ups on the day, with session number two next Saturday. And one interesting fact - all of our artists are women. Imagine that.
Posted by Kate Davis at 12:26 PM 1 comment: 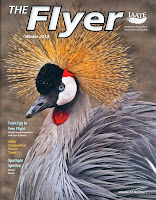 My photo of a Crowned Crane graces the cover of the winter issue of the International Association of Avian Trainers and Educators quarterly Flyer, a shot from Holland two years ago. The conference was in Amsterdam, and this bird was posing at Birdpark Avifauna, home to 1800 captive birds in natural displays. The story is featured in Raptor Round-Up Number 27, in living color on the newsletter page:
http://www.raptorsoftherockies.org/main.asp?id=newsletter
Posted by Kate Davis at 8:46 AM 1 comment:

Bird On the Loose

We'll begin by saying that this story has a happy ending, thank goodness. Jay lost his Peregrine Marlis on Thursday morning as she flew off, then lost the telemetry signal as she cruised the Missoula Valley. I started looking here in the Bitterroot yesterday morning, radio receiver in hand, then worked my way to Missoula. But I just had this feeling the she was on the railroad tracks and got a weak signal from atop the Scott Street bridge. I called Jay and was joined by him, Steve Olson, and falconer Scott Francis (coincidence, I know.) Sure enough, a signal from the bridge, and a policeman curious as to what the heck we were doing. Now I was employed as official driver, as Scott steered me through the streets on the northside, turn left, turn right, the signal getting stronger and louder. Finally we ended up in the lot of the old Louisiana Pacific mill, with a raptor on a pole for a second, which flew behind a huge dirt mound. I was sure that was Marlis, and ran to the spot. In she flew just as I swung the lure and VOILA! back home she went. Scott assures me that he has a little bit of experience tracking birds, like about 30 years, or whenever this technology was invented!
Posted by Kate Davis at 10:28 AM 2 comments:

JB Back from Tibet 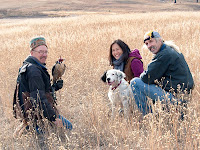 U of M professor Joel Berger has just returned from a research trip to Tibet, and no, he didn't bring us a Lammergeier (Bearded Vulture.) He left just after our program for his Montana Wildlife class and reports that student evaluations are in. Raptors of the Rockies made the top spot on the list of 7 guest speakers, so the "cool" reception we received from the attendees was just a clever disguise. I always say, it doesn't hurt to have a Golden Eagle along. Joel is pictured here on the right, with friend Ellen and Jay (with Marlis the Peregrine and Rio the dog.) Next, JB is off to the Arctic to chase Musk Ox's. Hard to keep up with this guy!
Posted by Kate Davis at 8:41 AM No comments:

Eagles Winging Their Way to OK

The last two birds recovered from the Grounded Eagle Foundation when it closed last July will soon be at their new home. I grabbed this big guy off his perch just as it was getting light and loaded him into the kennel for transport. I then got a flashlight out of my car to make sure I had the right bird! This male and a female Golden Eagle were picked up near Bozeman yesterday, and got on a plane for Oklahoma this morning. Both will be residents of the Comanche Nation Eagle/Raptor Program, on display with other eagles for tribal people in a 120 by 80 foot flight enclosure. Molted feathers are also collected for religious purposes. We were met by Troy of the Oklahoma Center and Mary Jo Willis of the Denver Zoo make the transfer here, photo by Jay Sumner. They then joined us for an afternoon of falconry with our Peregrines, and we were able to "kill two birds with one stone," deliver the birds and take advantage of a nearby duck paradise.
Posted by Kate Davis at 9:11 AM 1 comment: 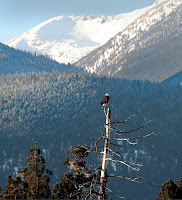 We are seeing more Bald Eagles around here that ever before this time of year. This photo was yesterday at Lee Metcalf Nat'l Wildlife Refuge, Bitterroots in the background. Resident Baldies tend to stick around all winter, and migrants from Canada show up and decide that this is far enough to go, staying until spring. Montana's populations have risen roughly ten percent a year since their lowest numbers in the 70's when only twelve pairs nested in the state. We now boast over 400 nests, and we'll see when their numbers plateau. One tree over a slough had a dozen perched Bald Eagles, hungrily eying some nervous ducks below.
Posted by Kate Davis at 10:33 AM No comments:

Just getting back from a grand search for sharp-tailed grouse in the wheat country of central Montana, and tougher than we had anticipated. Jay Sumner and I met up with pal Rob Palmer and his hatch-year Gyrfalcon x Saker hybrid (looks just like a white Gyr) named Achilles. After several months of flying, he turned out to be a she. A falcon breeder took a long look at size, feet and other features and determined female. Here is Rob casting her off, and she waits on overhead like a champ. Once again, the grouse that we did find turned out to be hard to catch, and they roll over in flight when the falcon gets close, startling the predator for the split second it takes to escape. And they sure can fly, fast and far. Our birds had great flights, and we enjoyed our trip with host, long-time falconer Ken Mesch at his home in Columbus. Our last night was an even greater celebration as a friend emailed Rob the cover of the new Audubon Magazine, with Rob's Grand Prize image of the fighting Bald Eagles on the front! He calls the shot "being in the right place at the right time," and I couldn't have picked a better spot to be right then. Congratulations, Rob!
Posted by Kate Davis at 4:09 PM No comments: