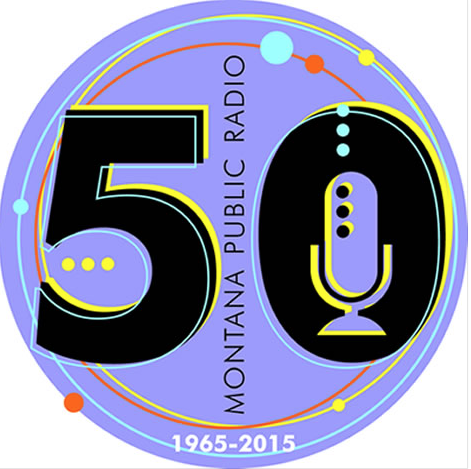 Join us at the University of Montana Ballroom, third floor starting at 2 pm Saturday for the grandiose celebration. Stories then a Raptors of the Rockies program with Pea Green Boat host Annie Garde at 2:30. Meet some birds and then have some cake. Action resumes at 7 pm for a dance party, Joan Richarde and friends spinning the disks. Fifty years, and we've been there for 24 of them! We love MTPR.
Posted by Kate Davis at 10:29 AM No comments:

The eagles were hanging out a quarter mile downstream yesterday, and I sneaked out with the camera, the male spying on me and female tucked away in the limbs. They used to hide from Osprey attacks in this cottonwood tree, well hidden by leaves in the late summer. Last year they began incubating eggs on about March 10th, hatching one chick on April 14th. We'll see what happens this year, all visible from a spotting scope in the living room! 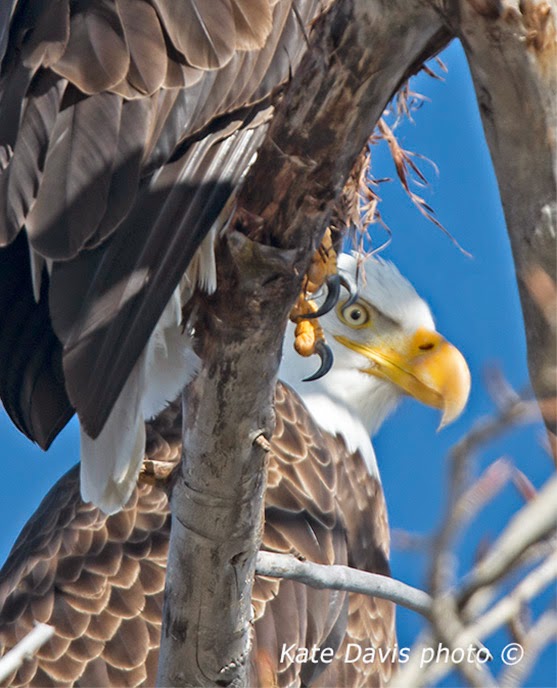 Posted by Kate Davis at 8:56 AM No comments:

Just Now In the Yard 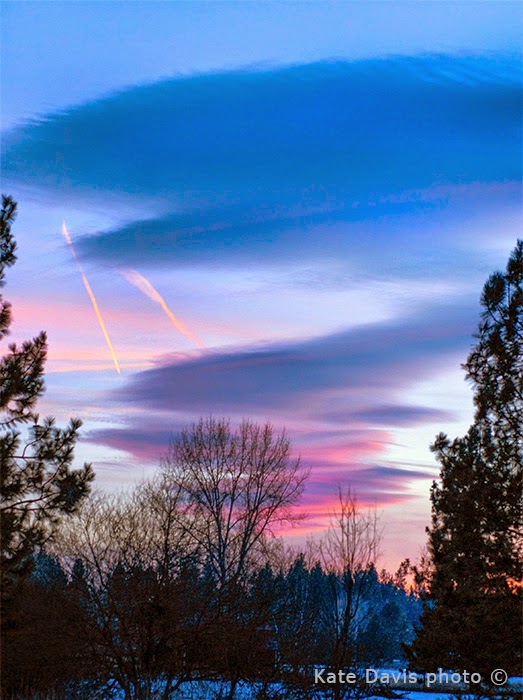 Posted by Kate Davis at 6:06 PM No comments: 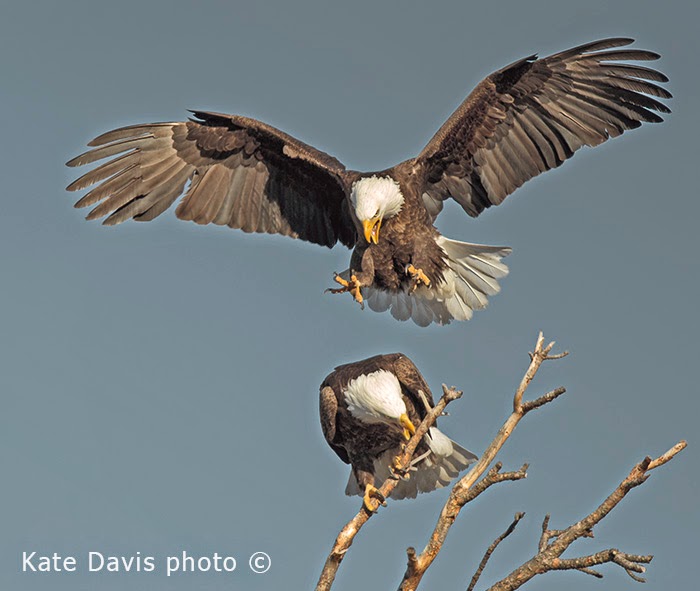 On stage at the Dennison Theater today, with each of the TEDx speakers in our first formal rehearsal with microphones and cameras and a masking tape X on the floor where are to focus our activities. It will be a big red circle for the real thing on Feb. 20th, and images on a giant screen. Get your tickets soon, and this will be the event of the year! Here is Matthew Marsolek who was up after me, dazzling the TEDx staff with his drums and friends in a very engaging presentation. See you in February! 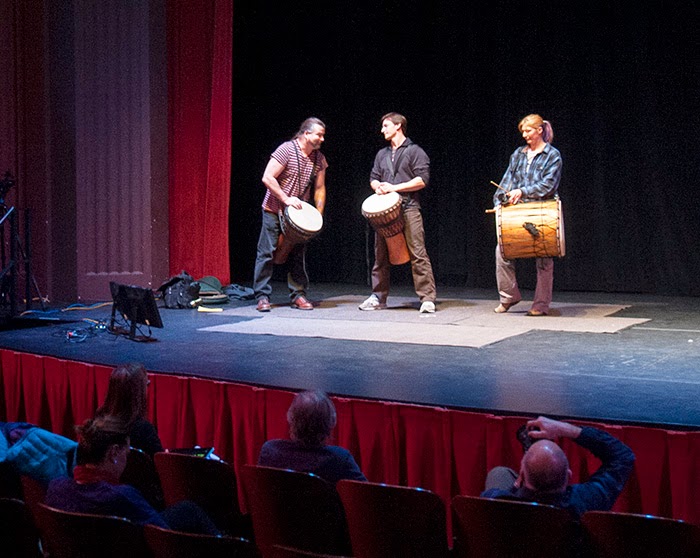 Posted by Kate Davis at 5:42 PM No comments:

What a Book Review! 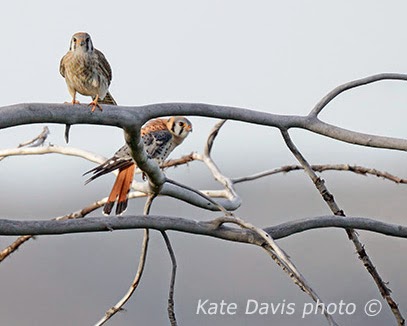 Look at a perched Gyrfalcon; they are pure muscle just waiting to be put into motion. Peregrine Falcons have a dark, brooding look; even in full sunlight they still give the feeling of being partially in shadow. Merlins are compact packages of energy and ferocity; ever on the very verge of flight. American Kestrels are, well… to be honest, they’re cute. When perched on a utility wire strung along a roadway, their boldly delineated blue gray, reddish brown, and white plumage combine with their small size, round heads and stubby beaks to give them as much the appearance of an anime character as a highly effective avian predator. Yet make no mistake; American Kestrels are every bit as masterful hunters as their larger relations.
Kate Davis, founder of Raptors of the Rockies, has spent decades photographing these smallest of North American falcons, and in her American Kestrel; Pint-sized Predator

, she teams up with fellow photographer Rob Palmer to present a truly captivating as well as highly informative portrait of the lives of her subjects. Relying as much on brilliant photography every bit as much as clearly written text to explain the life history of the species, the book is exceptionally approachable for even the most novice bird watcher.
However make no mistake; American Kestrel is by no means a “lightweight” book. As an overview of a species, bird watchers and general naturalists of most all levels of experience will find something contained within the book’s pages that will be both new and interesting to them. For my own part, I was particularly surprised to discover that American Kestrels employ a “leap-frog” migration pattern, and saddened to learn that eastern populations of the species are experiencing declines for reasons that are not entirely straight-forward nor easy to remediate.
Then of course there are the photographs. While I – like many readers of this review – have seen far more American Kestrels than I can ever hope to recount, I have never been able to see them at the level of detail depicted in Davis’ and Palmer’s remarkable photographs. Documentary in scope but raised to a level of true artistry, the photos contained in American Kestrel have opened my eyes to both physical details as well as behaviors exhibited by these birds that I have never been able to observe in the field. Truly, some of these images are so extraordinary that it bogles the mind how they were even captured on film (allow me the anachronistic metaphor please; “captured on a memory card” possesses no poetry whatsoever).
Thus for anyone interested – regardless of your previous level of experience in the study of birds – in learning about these “pint-sized” birds of prey; how they mate, reproduce, hunt, and migrate, as well as what the future may hold for them as a species, American Kestrel is the book for you. It should also be considered by American and Canadian teachers and school librarians for inclusion in their respective collections as the dynamic content of the full-color photographs are sure to capture young people’s attention, the text is well within the range of upper form as well as perhaps even some lower form students, and the birds themselves are readily observable throughout most of the North American continent. Indeed, American Kestrel; Pint-sized Predator is a book for the old and young alike; all that is required to enjoy it is curiosity and the willingness to learn something new.
By John Riutta, The Well-read Naturalisthttp://www.raptorsoftherockies.com/
Posted by Kate Davis at 4:02 PM No comments:

Jillian the Great Horned Owl is getting a lot more attention lately, walks in the yard and snapshots like this one. I just got it with a 60 mm macro on the Nikon in my right hand as she was perched on my left, arm stretched as far as it could go. We have our first run-through rehearsal for the Feb. 20th TEDx Talk on Thursday on the big stage at the Dennison Theater. She and I are discussing communication, and I know she will be a pro, as (almost) always! 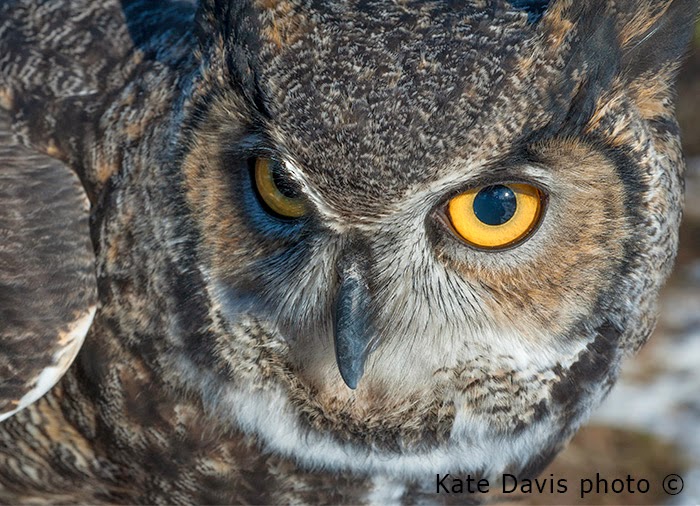 Posted by Kate Davis at 4:40 PM No comments:

Sure looks serious, these two standing by the nest this afternoon. This will be their second season breeding here, fingers crossed. They took over a Red-tailed Hawk nest last winter, and the hawks just moved 50 yards (or meters) away to build another one. Lots of productivity here in the Bitterroot. This is the way to meet fellow writers and photographers, a program at the Union Club in Missoula. Once a month the Outdoor Writers Association "Off the Record" meets over a beer or two, and I provided a PowerPoint and Sibley the Peregrine. Organizer Paul Queneau of Bugle Magazine fame describes it as, "a blend of professional outdoor communicators and interested college students, mostly from the enviro-journalism program at the U." You bet and met a gal, Sam that saw our program when she was in high school-in Stanford, MT, 2003! Pilot Jeanne MacPhearson from Helena picked me and 5 birds up in her airplane at the Stevensville Airport and flew 250 miles to "the middle of nowhere, Montana." All of the school children and community members from all around converged on the high school, what an event.  Sam was surprised to learn that we still have Max the eagle!  Seems like I just heard that last week... 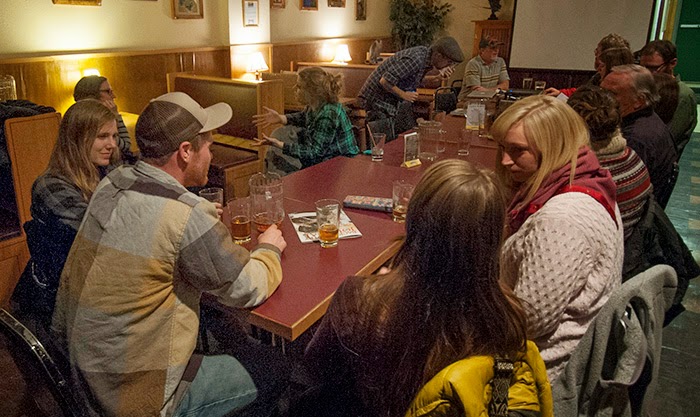 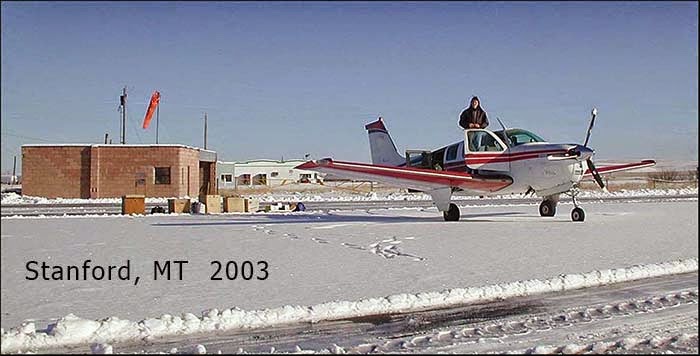 Yesterday in the Snow - Sibley 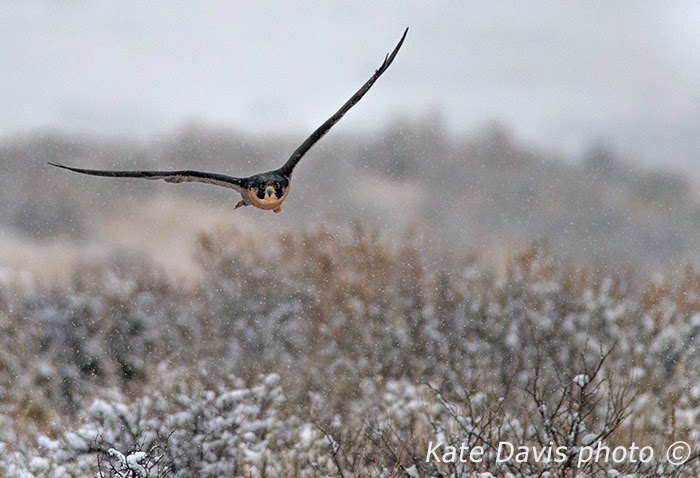 Today's male kestrel in the snow: 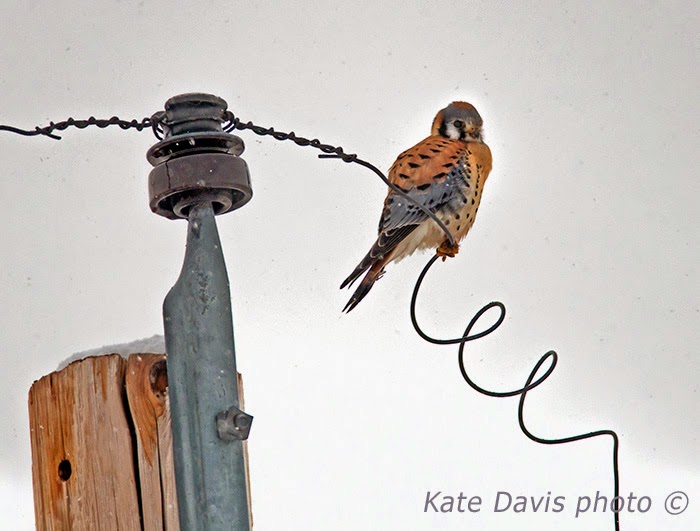 Visit By an "Old" Friend

A young lady named Tempe Regan approached me at the Raptor Research Foundation Conference in Texas in September and told me this story: “You came to my school in Superior, Montana when I was 9 years old. I remember you standing there with a bird on your arm and being in awe and thinking I want to do that!” She’s now working on her Master’s degree in Raptor Biology at Boise State studying Barn Owls!"
My records show:
Superior Elementary, Feb. 21, 1996.
Mr. Woodford, 230 students k-6,
two one-hour programs
Max the Golden Eagle, Red-tail,
Cooper’s Hawk, Western Screech-Owl
and Great Horned.
She just came for a visit on Wednesday and seemed astounded that there before her was the same Golden Eagle as 1996, 19 years later! 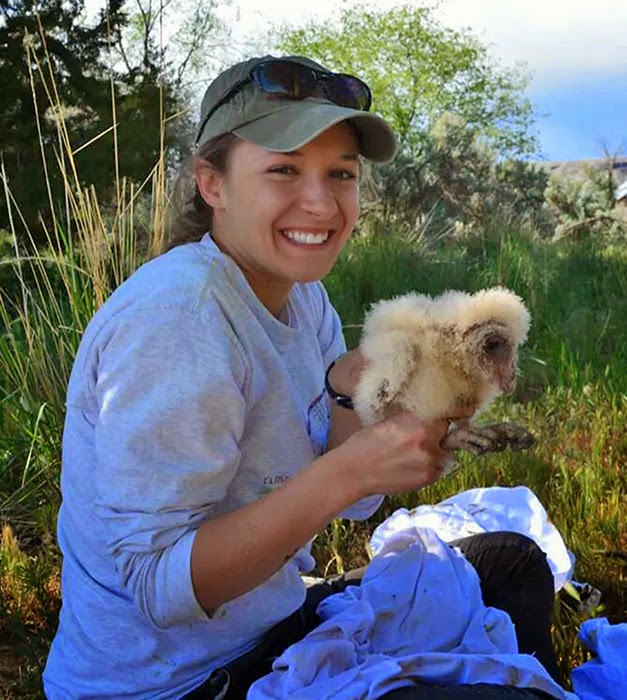 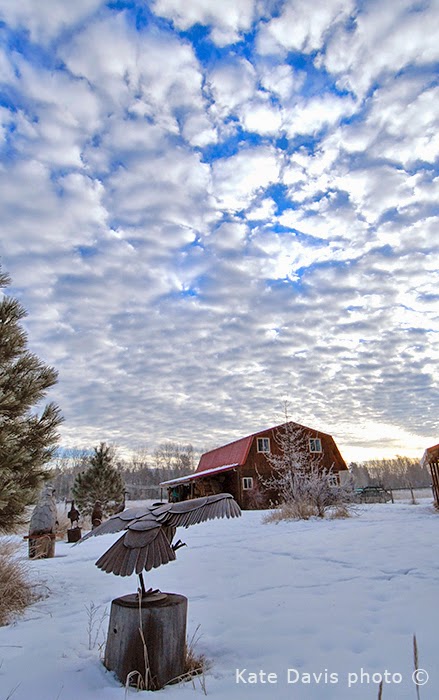 Posted by Kate Davis at 9:54 AM No comments: 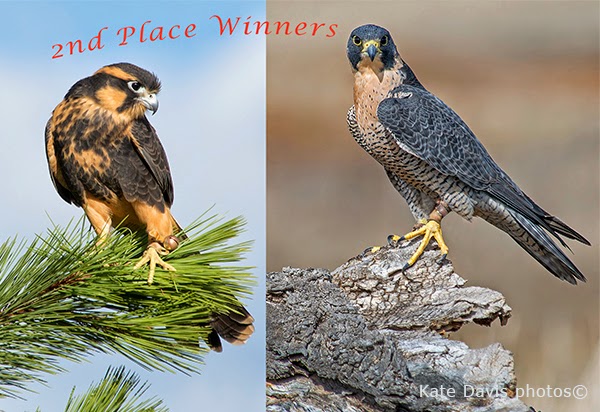 Sonora the Aplomado Falcon and Sibley the Peregrine each had 82 appearances.
Posted by Kate Davis at 8:07 AM No comments:

Jay Sumner and I were flying our Peregrines yesterday and his bird Ki briefly disappeared in the snow flurries. I broke out the telemetry to try to locate her (photo with Jay's iPhone.) 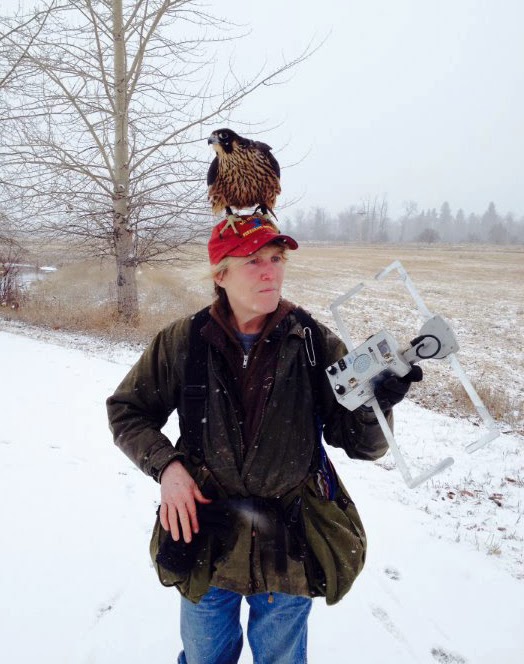 I'm working on the end-of-the-year permit reports for 2014 and the winners for most programs are...drum roll please...Owen the Saw-whet Owl and Alisa the Red-tail for 83 appearances in programs and tours each! An impressive discovery is that we were just one person short of the total audience for last year of 2663. Lots of fun for 2014, and our record is 7643 people in 2003, with 82 programs. Probably will never be that ambitious again, but maybe. 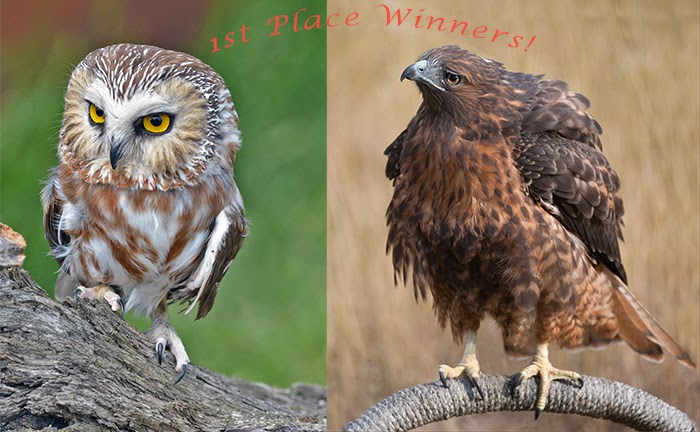 Posted by Kate Davis at 4:40 PM No comments:

These two falcons were over in the Sapphires on New Years Day, the first flying off a pole at the MPG Ranch in a flurry of plucked feathers. Looks like he's packing a duck wing to me. Then the second sat tight with a big crop, got a few photos and left him alone to digest in the sun. Prairie Falcons are people too. 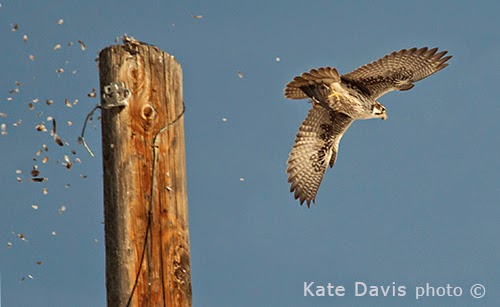 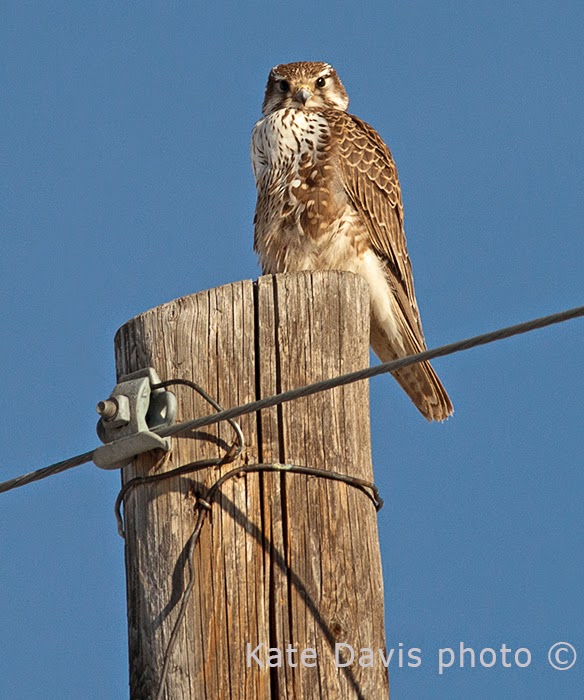 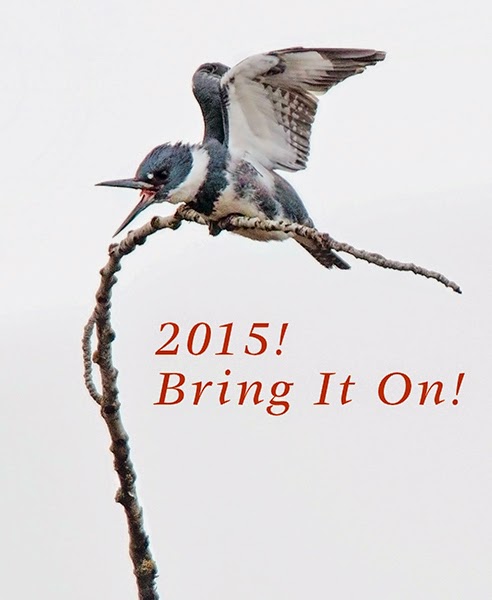