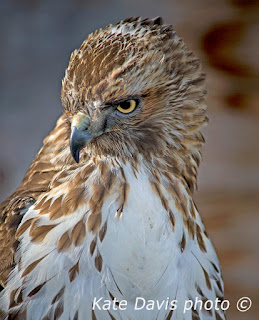 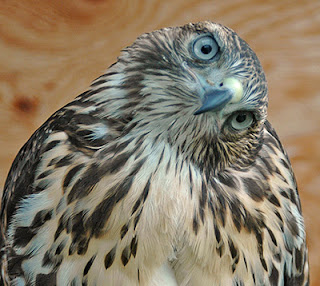 Posted by Kate Davis at 9:45 PM No comments:

Dandilion Cloverdale on the right, and friends - Scout, Tom, and Sarris yesterday by the metal penguin sculpture. My goodness, do we have fun over here. 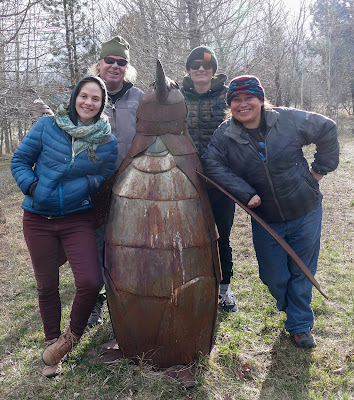 Posted by Kate Davis at 8:50 PM No comments:

I had a HUGE program at the University of Montana Ballroom for 150 landowners on Saturday, lunch and two big screens for the PowerPoint. Sibley the Peregrine (in the circle) waited patiently and Jillian the Great Horned Owl were the stars. At the very end, after I had everyone hoot like an owl I gave a little soliloquy:
“In 1978 I saw Bootsy Collins (Funkadelic) perform in this room. Never did I imagine I would be here 40 years later, 30 years with Raptor of the Rockies, presenting this program for such a distinguished audience of landowners doing the right thing for conservation of our natural resources." Quite the rhetoric and as proud as a person could be. 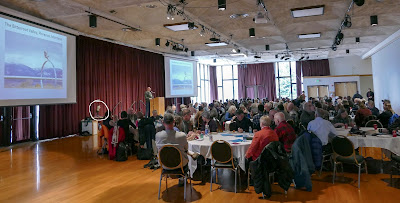 Man, did this take a while to put together, our 30 Year Issue. I went through the previous 54 newsletters selecting some special gems, and quirt the compilation if I do say so myself. Read it here, in living color and in the snail mail Tuesday, how 20th century. 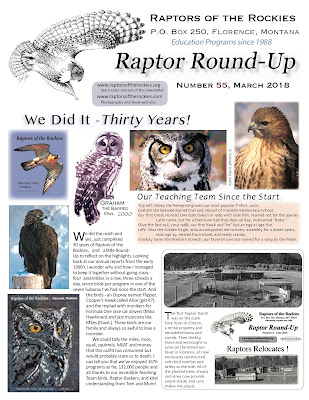 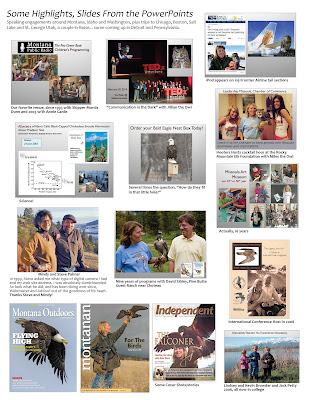 Posted by Kate Davis at 4:14 PM No comments:

Our Favorite Teacher Kevin Cashman had us back for a gathering of the 4th grade classes, for which he received a PowerPoint, program with Sibley and Owen, discussion of the book "My Side of the Mountain" and a CALENDAR! These kids are the greatest - Hazel, Mason, Sophia and Audra assisting us back to the car. Not a bad view from that school with SnowBowl in the background. Heading up to the Bowl Friday, then another program Saturday. 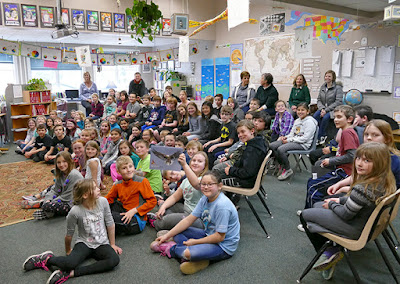 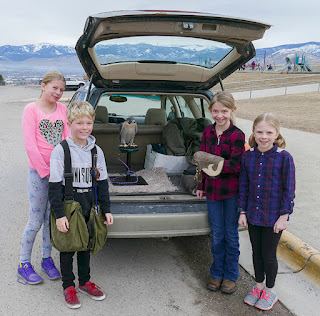 Posted by Kate Davis at 9:13 PM No comments:

These darned eagles are teasing me - hanging at the nest, chasing other eagles, copulating. But no incubation! I am on the verge of panic mode, as this is what I do every single evening, "shoot" the birds. My favorite pastime/entertainment/diversion. Like Tom says, "Don't give up yet," but photographing woodpeckers in the front yard just isn't the same. 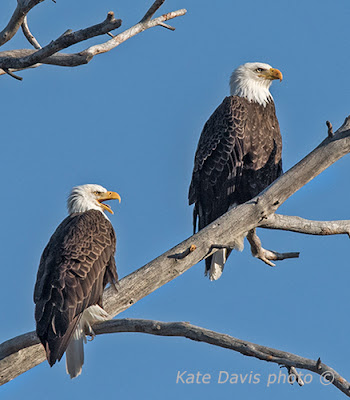 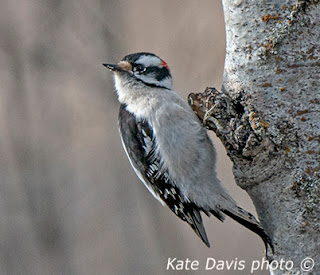 Lots of activity around the nest, including one Columbian Ground Squirrel - the first one I've seen all season and there it was saying over the river!   Mike and Ginny DeNeve had just reported "gophers" above ground, and voila. Unfortunately no incubation...yet. Last year nesting began on March 5th, the year before the 12th and pushing it here, eagle pals. 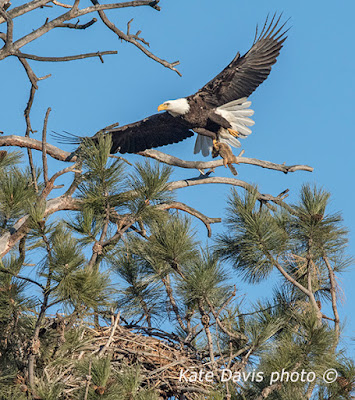 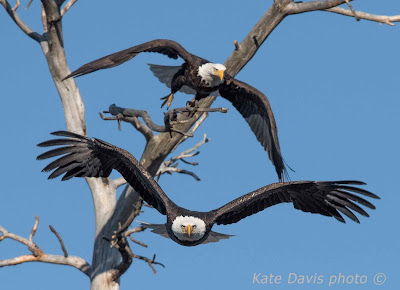 One of Sonora's Hangouts 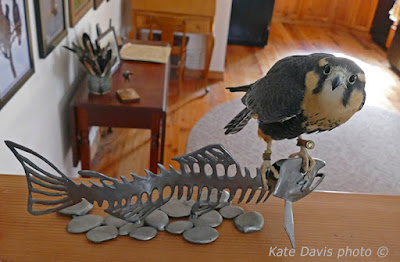 Here's that story by Ryan Hall, Rural Montana Magazine.Mountain Press Anne Iverson emailed me today:"Someone just came in and bought a book because of that article."
Thanks, Ryan! BAP2-2 on the way. 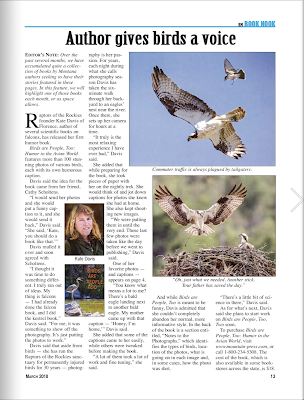 Posted by Kate Davis at 9:18 PM No comments:

This American Kestrel sure didn't mind Sibley landing near-by,twice. Down at the river I've seen one particularly feisty female kestrel attack everything from eagles to one perched peregrine minding her own business. I am assuming this behavior was related to a near-by nest, orb maybe just having a bad day. 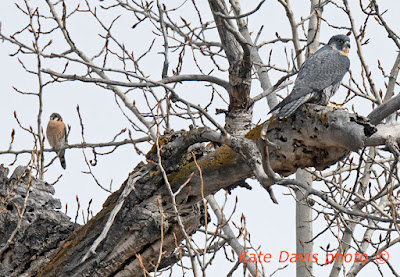 Posted by Kate Davis at 8:44 AM No comments: 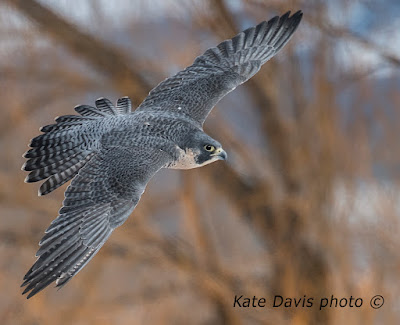 Perhaps our last pheasant hunt of the season with Sib the Peregrine today, thanks to about a half-dozen of these (Northern Harriers.) Plus hawks and eagles acting cranky. Posted by Kate Davis at 7:03 PM No comments:

Yesterday a huge storm rolled in about 2 pm, Tyler Roady, Kim Thomas (photo credit) and I were watching thinking it would just hit the Bitterroot, but it struck the Bowl with a fury and thunder, shutting down the lifts. We were looking for a ski I lost on Sunday. Yep, popped off near the bottom of Longhorn and never could find it, probably in the trees on skiers right. A futile search and it looks like I'll have to come back in the spring, bummer. On Sunday as I walked by all of the masses watching the Gelande jumping from the deck at the bar, everyone shouted, "Where's your other ski?" then even more in the lodge and locker, the same question. I explained that I lost it and the top responses were, "Where is it?" and "Why don't you go get it?" Lost means it's lost. Nowhere to be found. Like in a Lost and Found. The "found" things aren't lost anymore. I felt like Jerry Seinfeld! 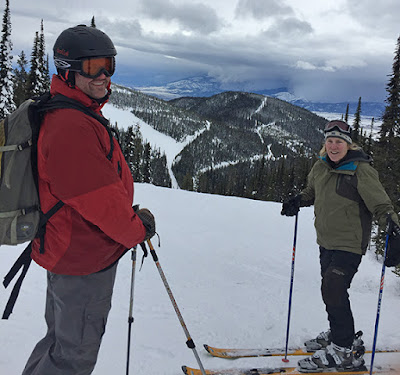 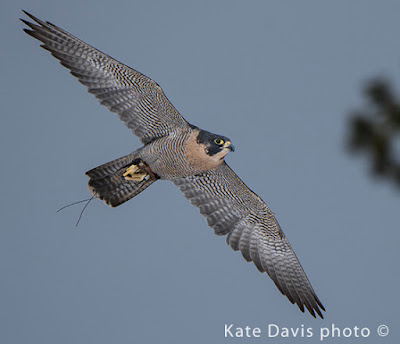 Posted by Kate Davis at 6:01 PM No comments: